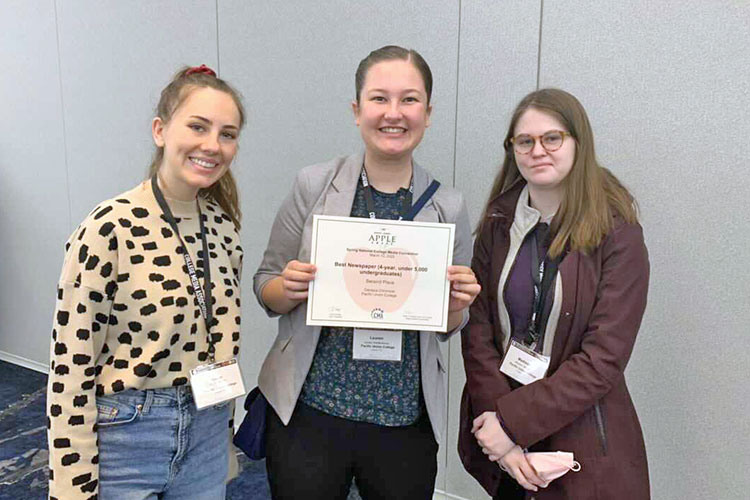 Adapted from the cover article of the March 18 Campus Chronicle

The editorial team was thrilled to receive this award, and brought back congratulations to the rest of their staff who worked tirelessly to put together each issue. They are also grateful to the departments of Student Life and Academic Administration, as well as to PUC alumni, for their generous donations which made the trip possible.

For Brogan, Kantor and Twohey’s address offered a way to incorporate both compassion and professionalism when reporting the news. “Journalism is an objective field, and some of the topics we talk about and research are very sensitive,” she commented. “I thought it was really inspirational to hear from these two women who tackled such a difficult topic with empathy for the victims while maintaining that objectivity.”

Franklin said the most impactful session she attended was the pre-convention workshop called “9/11: A Deep Dive,” in which students learned about media coverage of the terrorist attacks on September 11, 2001 and walked to the memorial at the World Trade Center. She called visiting the memorial an “emotional” experience, and said that “it was humbling—you could just stand there and take it all in for a long time.”

VandenHoven was particularly moved by the session titled “Disinformation, Dictators and the Undaunted: Covering the Ukraine/Russia War.” The panelists included two Ukrainian Americans, a journalist and a filmmaker, who explained the importance of staying informed on the injustice that Ukrainians are suffering, and what journalists can do. “One thing that one of the presenters said which stood out to me was ‘Images and news stories are not taken, they’re given. They’re given because you hear people and sit with people.’ I will remember that for a long time,” VandenHoven said.

The students at the conference found the comparison between their own reporting experience and that of student reporters from other institutions to be a valuable learning experience. Their ability to be competitive as an especially small school alongside publications from some of the nation’s top-ranking institutions showed the team that the quality of the work produced by Campus Chronicle staff is a testament to the dedication of PUC students, staff and faculty who make it possible.