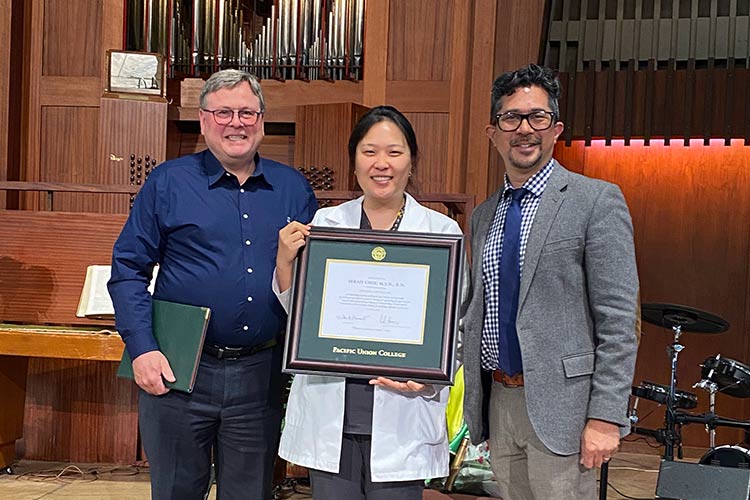 It was the first time in Pacific Union College’s history that a nursing faculty member received this prestigious award. At a special colloquy on May 19, Assistant Professor of Nursing, Serah Choi was honored as the college’s 2022 Educator of the Year.

Academic Dean Milbert Mariano, presented Choi with a framed certificate, a green superhero cape and lightsaber, which have become time-honored traditions. Choi’s husband and PUC’s Aviation Program Director, Keunsong “Chris” Cho, paid tribute with a slideshow documenting her life and journey to achieving her dream job as a college nursing professor. As a young girl in Kwangju, Korea, Choi revered her father, a biology professor. She enjoyed watching him teach and going with his class on field trips.

Choi excelled in academics. In 1998 she came to the United States to study at Monterey Bay Academy. Choi earned her bachelor’s degree in nursing at Pacific Union College in 2008. After working as a nurse at Adventist Health St. Helena, she completed her Master of Science in Nursing at Loma Linda University in 2013. Finally, Choi’s childhood dream became a reality when she returned to PUC, this time as a professor in the school of nursing.

Dr. Sara Kakazu, PUC’s 2021 Educator of the Year, gave a cascading set of clues hinting at this year’s recipient before revealing Choi to resounding applause.

Colleagues and two first-year nursing students shared tributes to Choi. “We are so lucky,” Nursing Chair Kimberly Dunker said, “to have Serah Choi leading the underpinning of our program through teaching the foundational skills, and directing the students and faculty in our labs.”

Ayla Oania said she admired her professor’s emphasis on preparation and “distinct sense of composure” – traits she hopes one day to have as a nurse.

Levi Alamo related that Choi helped soothe his nerves during Friday clinicals with her smile and calming presence. “Eventually her confidence in me allowed me to find confidence in myself.” Now, Alamo looks forward to Friday mornings. He has Choi to thank.

The Educator of the Year award is chosen jointly by the Faculty Development, Research, and Honors Committee and PUC students. Wearing white coats, scrubs and excited smiles, many of Choi’s nursing students surrounded her afterward for congratulations and a celebratory photo.

Choi’s example proves one can be both a professor and supportive friend to your students, said Assistant Professor of Nursing, Jenna Park.

“She’s shown us,” Park said, “what a great educator should be.”