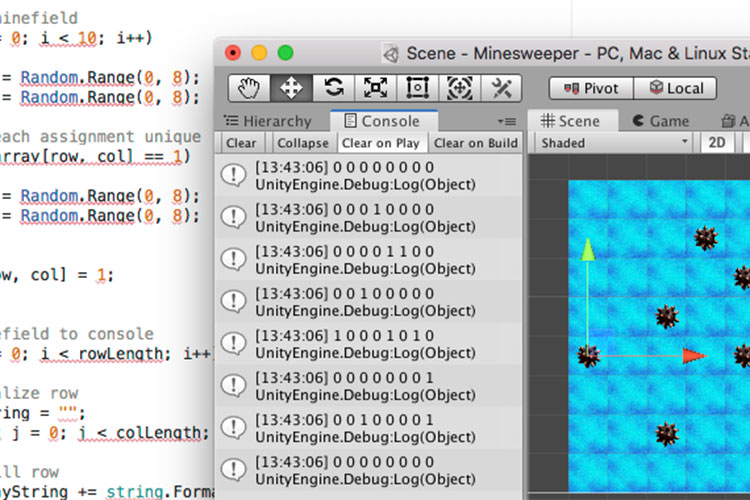 A quintessential 1990s computer game, Minesweeper is making a comeback in a big way during this year’s PacificQuest at PUC, a program designed for middle school students interested in STEM fields. It includes a number of interactive workshops, including, this year for the first time, the Minesweeper project. A life-sized version of the popular game is in the works as a collaborative project from the departments of engineering and mathematics at PUC and Andrews University.

Professors Chantel Blackburn of PUC and Wayne Buckhanan of Andrews have put the best and brightest of their respective departments on the job, and are working on perfecting the game board. Those playing the game will find a grid of identical squares, a number of which secretly contain “mines.” The player is then directed to choose a square; if it contains a mine, the game ends, whereas if it does not hold a mine, a number will appear in the square displaying the amount of nearby squares containing mines. This information is then applied by the player as they attempt to uncover more safe squares. To win the game, the player must select all the safe squares without mistakenly choosing a mine.

Creating a life-sized version of this game is no short order, and professors Buckhanan and Blackburn are using all their resources to ensure everything runs smoothly. Professor Buckhanan has enlisted the aid of three juniors from the department of engineering and two juniors from their department of computer science, and together they began assembling the game.

“We are building a physical ‘minefield’ of circuit boards that create a room-sized game of minesweeper,” Buckhanan explained. “The current design involves a small microcontroller and LEDs on a printed circuit board for each cell. They will be connected with short sections of wire to form a grid of arbitrary size, with each cell potentially connected to four neighbors to the north, south, east, and west.”

Buckhanan went on to explain when powered up, the boards will decide whether they are housing a mine or not, then check with their neighbors to decide how many mines are surrounding them. They will then wait for a button press to reveal or flag a cell and either tell how many neighboring cells contain mines or “explode.”

Student involvement in the project is not only crucial to its success, it is also a significant learning experience for all involved.

“Our students seem invigorated by the prospect of working with real-life clients,” said Buckhanan, “and have gained a deeper understanding of what it is to complete assignments not explicitly tied to scholastics.”

Once the game arrives at PUC, Blackburn will be in charge of the game’s final touches.

“Our students will assemble the circuit boards, including wiring the connections between the cells,” she said, “and setting up the power supply and computer to drive the program that controls what the lights and the switches.”

After completion, the game will be used for a PacificQuest workshop, and will continue to inform various classes and projects on the PUC campus for the foreseeable future.

“I envision this board being employed as a supplemental teaching aid in engineering, computer science, and other courses,” Blackburn said.

As far as collaborative projects go, the PUC-Andrews Minesweeper is a promising venture.

“It became a project which will allow for enrichment of students at both our institutions in a variety of ways,” Blackburn noted. “I’m excited we’ve had this chance to work together and see how our schools can collaborate and cooperate in a way that can add value to an investment in Adventist education.”

For more information about the upcoming PacificQuest events, those interested can visit the Pacific Quest website at puc.edu/academics/pacificquest.