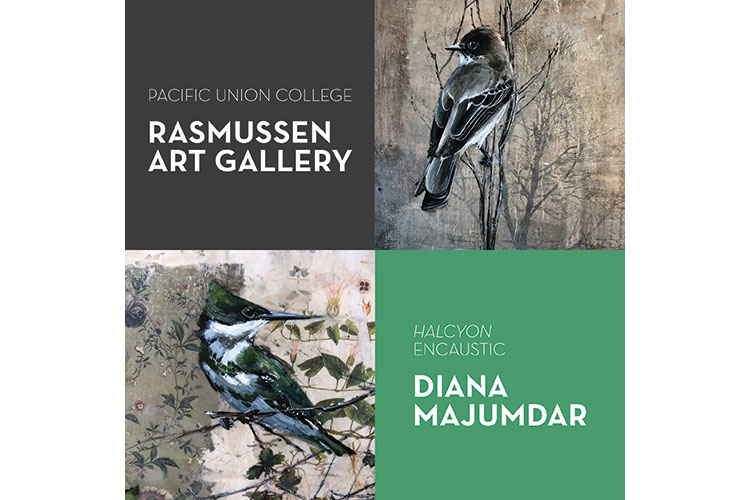 The Rasmussen Art Gallery on the campus of Pacific Union College will host the opening reception for an art show by guest artist Diana Majumdar on Saturday, Jan. 12, from 7-9 p.m. Majumdar’s work will remain on display in the gallery through Feb. 10.

Majumdar works primarily with encaustic painting, which utilizes beeswax with damar resin mixed in for elasticity.

“While it is melted, the wax can be applied with brushes, one brushstroke at a time, like you would with regular paint,” Majumdar explains. “Except wax begins to harden the second it leaves the hot plate, so I have to work fast.”

Though she graduated with a BFA in drawing and painting from Academy of Art University in San Francisco, art was never Majumdar’s career goal.

“It was actually my dad’s dream to be an artist,” she says. “His parents insisted he pursue a ‘useful’ profession, so he became an auto mechanic, but we often watched him draw or use watercolors casually at home.”

Years later, Majdumar recalls, both she and her sister took an entrance exam to an art school in Estonia—the only way to study art with proper instruction.

“Both of us failed,” she says, “but only our dad was devastated.”

Passing would have meant studying hard with unfriendly professors, learning art from the basics up, traveling on several trams in the dark to and from school each day, while “all I wanted to do was doodle princesses and fairies,” she admits.

Today, Majdumar has her own studio in West Petaluma, where she has lived for six years. The title of her show in the Rasmussen, “Halcyon,” has two meanings: first, a period of time in the past that was idyllically happy and peaceful; second, a tropical Asian and African kingfisher.

“I love unusual words,” Majdumar admits. “English is my second language, and I always feel somewhat lacking in my vocabulary. A few years ago, I helped my son study for his SAT and I still get excited when I hear words like ‘boon’ and ‘assuage’ on the radio.”

Read more about Majdumar, her work, and her artistic process on the PUC blog.

“Halcyon – Encaustic” can be viewed in the Rasmussen every Thursday-Sunday from 2-6:30 p.m. Both the opening reception and admission to the gallery are free, and open to the public.