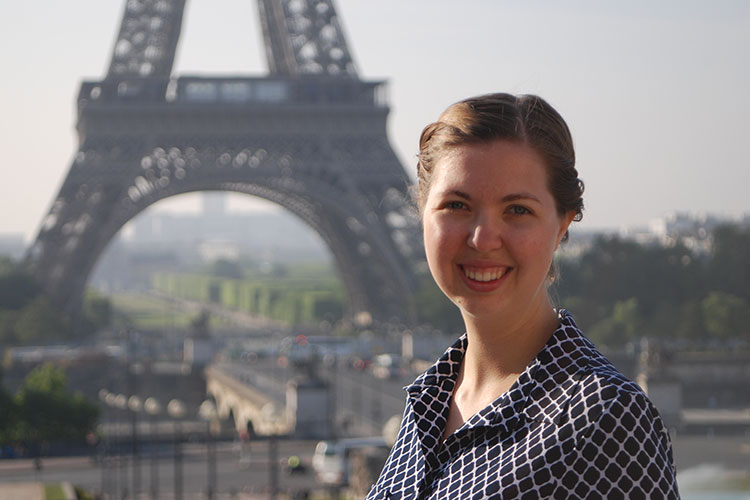 In the early decades of the 20th century, a baby girl was born to German parents in Ukraine. In 1957, that baby girl, now grown, immigrated with her family to the U.S. from Germany. In 2014, her granddaughter, Erika Weidemann, graduated from Pacific Union College with a degree in history, and has since won a number of grants, fellowships, and awards for her research on German-American history.

For her dissertation, titled "A Malleable Identity: The Immigration of Ethnic Germans to North America, 1947-1957,” Weidemann received research grants from the Glassock Center for the Humanities, the Society for German American Studies, and Texas A&M University. These competitive grants ranged from $500 to $5,000 and were awarded for the significance of her research topic.

Weidemann also won the Keeble Dissertation Award, given to the best dissertation project in the history department at Texas A&M, the German Script Award from the Quadrangle Historical Research Foundation for her work with German primary sources, and the Fasken Research Award, given to those who combine excellent research with a passion for teaching.

“The family connection got me interested in the topic at first,” Weidemann says, “but the research has become more fascinating the longer I study it.”

Weidemann first began studying immigration from Germany to North America in the post-World War II period when she wrote her senior thesis on the topic while at PUC. She then used that paper as the basis for a seminar paper in her master’s program and it is now her doctoral dissertation. She focuses specifically on the experience of ethnic Germans who had been living in the Soviet Union; her dissertation is a comparative study of ethnic German immigration to the U.S. and Canada, and the role that religious affiliation and voluntary organizations had on immigration destinations.

“Religious identity alone did not dictate where they immigrated,” Weidemann explains. “It was a combination of legislation, ethnic identity, and the organization helping the immigrant. Secondly,” she continues, “a group's identity can be very fluid. Mennonite ethnic Germans were at times German, sometimes Dutch, and still other times Soviet. Some ethnic Germans who were not Mennonite pretended to be Mennonite so that they could immigrate with the help of the Mennonite church's aid organization.”

To conduct her research, Weidemann visited archives in both large cities and tiny villages in France, Canada, Germany, Pennsylvania, Kansas, North Dakota, Washington, D.C., and New York City. She also met individuals who experienced what she writes about.

“We often think of immigration as a transaction that happens between an individual and the government of the country the individual would like to enter,” says Weidemann. She explains, however, although the government was of course the entity that passed laws and had the final say in who entered the country, after World War II, aid and religious organizations played a large role in bringing immigrants to the U.S. and Canada. “These organizations did much of the work,” she continues. “They not only had a powerful voice but made a huge impact. Without them, far fewer individuals would have had the chance to rebuild their lives after the war.”

With immigration as a hot topic across the nation right now, Weidemann can’t deny her research, despite focusing on the past, has informed her view of current events and policies regarding immigration to the U.S.

“I am hesitant to draw direct comparisons to present-day immigration because circumstances in the 1940s and 1950s are not the same as the 2010s,” she states. “I do believe, however, that my research presents lessons for today.”

First, Weidemann says, it is very difficult to immigrate to America.

“Some of the individuals I encountered in my dissertation had to wait ten years before they could enter the United States,” she recalls. “During the post-war period, immigration paperwork for a person once reached fifty-one feet in length when the papers were laid end to end. Immigrating to America today without a family preference, occupational, or student visa is still very difficult. People spend a lot of time, money, and effort obtaining a visa.”

Secondly, Weidemann says her research has reiterated what she and many others already believe: we need to treat immigrants with love and respect.

“To the U.S. government, individuals wanting to come to America after World War II were merely names,” she says. “The immigrant, however, was a person who was affected in very real ways by the government's laws and policies that included banning individuals with physical or mental disabilities. Families had to weigh America—a life without poverty—against being forever separated from their child, who had Down's syndrome or another medical condition.”

The third lesson Weidemann extracted from her research is both the individual and the organization is a powerful tool for change. On the other hand, she points out, Church World Service—a still-operating cooperative ministry of 37 Christian denominations providing refugee and other assistance—only succeeded because thousands of individuals agreed to sponsor one person or one family.

Weidemann explains that after World War II, Canada opened its doors to war refugees before America did.

“America has not always led the world in helping others,” she points out. “During the Cold War, the United States became more interested in helping immigrants only because these people were escaping Communist countries.”

Weidemann believes her experience at PUC set her up for success in her research, preparing her well academically for graduate school, and providing her with mentors who continue to invest in her education. As a PUC junior, Weidemann attended the Association for Seventh-day Adventist Historians conference with the college’s history professors, where she presented a paper.

“It was there I decided to become a history professor and attend graduate school,” she says. “I’m so glad PUC had a senior thesis as part of the requirements for a degree in history, and I had department support to conduct original research for it.”

Weidemann expects to defend her dissertation for her doctoral degree in May 2019, then hopes to begin teaching at university level in the fall.

“It’s pretty neat to realize I have created knowledge by producing written work on a topic no one else has studied before,” she says. “It is gratifying to know I also have preserved the history of a group of people who otherwise would have disappeared as those who experienced those events pass away.”

For more information on PUC’s department of history, visit puc.edu/history or email hmunson@puc.edu.

A Statement from President Cushman