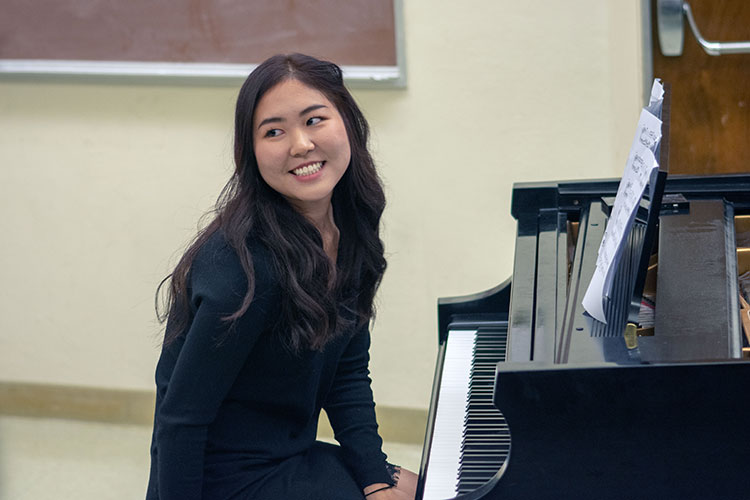 Many people have created movie adaptations of Charlotte Bronte’s Jane Eyre; there’s even a musical based on the Victorian novel. But few—if any—have attempted to capture their interpretation of the well-read romance on piano.

Laurel Kwon, senior English major and Honors student at Pacific Union College, recently completed her final Honors project, for which she translated her understanding of Jane Eyre into a ten-minute piano composition.

“It was more difficult than I thought to write music based on a plot that’s already been written,” she admits. “I usually tend to just improvise and create a melody out of that, but it was actually quite fun to take on the challenge.”

Kwon has been playing piano since the age of five, and has grown up creating and composing at the keyboard whenever could. When she took “Victorian Literature in Britain” last year, Kwon felt compelled to delve more into Jane Eyre, crediting her professor, Dr. Linda Gill, with her interest, saying Dr. Gill “can transform boring rocks into blooming, fragrant flowers in her classes.”

As she contemplated her senior thesis, Kwon hit upon a unique idea: “I thought it would be fun to connect my English major side with my musical side,” she says.

On Thursday, Nov. 29, Kwon performed her original composition for professors, classmates, and other interested parties. It was her final presentation of her Honors program, in the choir room in Paulin Hall.

“Jane Eyre is a passionate bildungsroman that weaves romance into a continual questioning of gender, class roles, and a plethora of other societal issues,” Kwon explains. “Because there are so many ideas, it’s pretty impossible to squish every single piece of rhetorical commentary into a ten-minute piano piece, but I tried to outline the five main themes of the novel as the focus of my composition.”

Along with her composition and performance, Kwon also produced a 12-page thesis paper. While preparing these final products, Kwon read Jane Eyre more times than she can count, and spent hours painstakingly placing her composition into MuseScore to create printed sheet music.

“Interestingly enough, I gathered the same emotions and themes every time I read it,” she says. “I had been hoping to discover different emotional notes with different readings, but because my viewpoint was limited, I was able to create more literary analyses each time instead of musical analyses.”

Kwon says her end goal was to ultimately create a piece she could say accurately depicts her interpretation of Jane Eyre.

“As I worked on my project, I think I ended up hoping to prove words and music are two completely different topics,” she recalls, “but they can be connected through parallel emotions. I think I was able to do that—and hopefully my audience agreed with me!”

Kwon has plans to attend dental school next fall, but after she completes her coursework in December, she hopes to serve as a student missionary or in a dental office until then. She has also, albeit hesitantly, convinced herself to set aside her Jane Eyre composition.

“The more I look at it, the more I want to change,” she admits. “It’s just going to be an endless cycle, so I’ve put it aside with a decisive sigh, and it’s finally complete now.”

Read below for an overview of the five movements of Kwon’s composition. Read more about senior theses, final projects, and other culminating works required of all PUC students in an article from earlier in 2018. For more information about PUC’s Honors program, visit puc.edu/honors or email honors@puc.edu.

Gateshead, or the Reeds’ home, is the gloomy starting point of Jane’s journey. As an orphan—and an impoverished, unloved one at that—Jane depends on her foster family to survive. Brontë creates a chilled, unwelcoming atmosphere in Gateshead Hall with each physical and emotional insult that Jane receives. To depict this idea musically, then, I first made measures 1-44 begin with a solemn repetition of minor chords in the key of C# minor. As the tempo is fairly slow, the melody consciously weaves through the chord progressions in a sad, lilting way. This, in effect, was created to try and capture Jane’s melancholy, troublesome childhood at the Reeds’ home. After the chord progression, a section of major arpeggios interspersed between the previously introduced minor chords serves to represent the brief moments of happiness that books provided in Jane’s torturous time there.

Lowood, an all-girls charity school for orphans, unfortunately produces another set of obstacles for Jane; the students are starved and treated horribly by the heads of the school. Mr. Brocklehurst, in particular, attacks the girls with his hypocritical agenda of shallow religion and abstinence. So, starting in measure 105, a new section is introduced in the key of D minor to depict the relatively somber mood throughout the entire section. As Lowood is a place mostly filled with unhappy memories, the key simply shifts a half step up from the previous movement to signify a change in location. Also, the melody lilts in a similar fashion as the first section to create a similar sense of unease and unhappiness.

Thornfield Hall, Mr. Rochester’s home, is Jane’s next step in her journey. It is the place in which Jane experiences both happiness and, as the name suggests, thorns of sadness. Yet, through her obstacles, she is able to fully construct and take ownership of her identity. Although Jane does leave the relationship and there are rocky times, there are moments of happiness that compel Jane to come back to Rochester in the end. This is depicted with the shift to a major D key in the next section in measure 156. The base notes also imitate a waltz, as if Jane and Rochester waltzing back and forth through their relationship.

In measure 163, there is a sudden key change to E flat major, which signifies a couple of things: the gradual increase of suspicions that Jane has about Rochester, and the rapid toll that it takes on the relationship. Finally, the most important parts of the piece are shown through the intermittent whole rests throughout the section; these signify, ironically, Bertha’s screaming. They are simply pauses instead of a loud clang because they also symbolize Jane’s shock and Rochester’s silence about Bertha until the very end.

In measure 157, wedding bells ring through a variation of the wedding song; they signify the moment that Rochester and Jane are about to get married. Yet, as they are interrupted by discordant chords that signify the chaos about Bertha trying to kill Rochester and Jane finding out about the whole situation, the section abruptly ends as Jane leaves Thornfield.

Finally, Jane finds happiness in a true family, as she meets the Rivers. Yet, it is hard for her to completely adjust—particularly as Sinjin proposes to her—because Rochester still remains in the back of her mind. So, after Rochester is injured, Jane decides to return to him. The last section, which has switched back to the key of D, is relatively happy-sounding; Jane finally finds a family to call her own, and even when she inherits £20,000 from her uncle, she decides to split it evenly amongst her family members because she is so overjoyed to have found them.

Although she does waver when Sinjin asks her to marry him, Jane hears Rochester faintly calling in the distance, which is signified by a soft whole note that is held out in measure 210. Finally, the melody repeats that of the previous section in Thornfield, which signifies Jane’s return to Rochester.