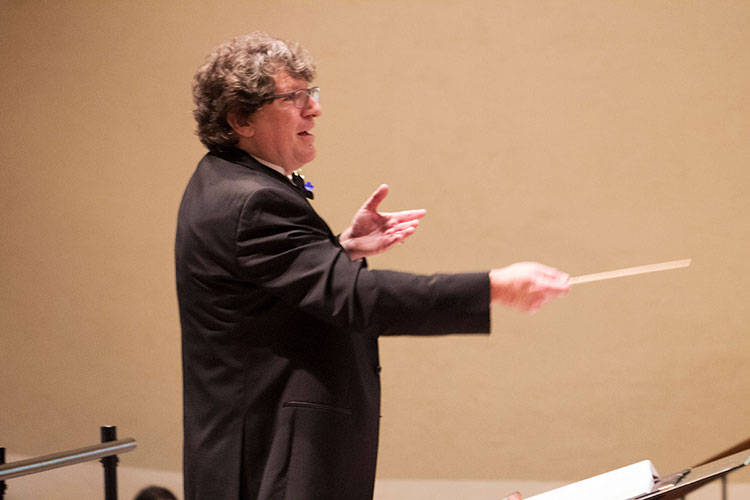 “Picture the scene,” says Asher Raboy, resident artist in the department of music at Pacific Union College. “Jesus stands on a mountainside, facing an audience used to an Old Testament God of vengeance. It’s the middle of the Roman occupation. It’s a world of vengeance. And the first word Jesus speaks as he begins that sermon on the mount is not ‘smite,’ it’s ‘blessed.’ The world is changed overnight.”

Raboy is explaining the reason behind his choice of setting for his latest composition, The Beatitudes. The 40-minute cantata based on Matthew 5 was written for choir, orchestra, and three soloists, and will have its debut during PUC’s Homecoming Weekend in honor of Paulin Hall’s 50th anniversary.

“Most people, when they set the beatitudes, use peaceful, quiet music,” Raboy continues. “That’s not the message I wanted to give. The first time the word ‘blessed’ comes into the piece, it is a very harsh chord. Loud, and clanging. It’s a representation of how discordant it was to hear that word.”

Primarily a pianist, Raboy began his love affair with music at the age of five, when his sister began taking lessons. His father was the son of immigrants who believed to be American, you had to educated, and you had to study music.

“We begged and begged our dad to buy a piano for the house,” Raboy recalls with a smile.

Though Raboy’s father finally agreed, he would only do it if both Raboy and his sister signed contracts saying they would play through high school and practice 30 minutes every day.

“I was five,” Raboy reiterates. “I couldn’t read, and I couldn’t write. But I made my mark on that paper, and my dad held me to that contract. If he thought I was going to be a professional musician someday he never would have done it,” he adds with a laugh.

The second major musical event in his life took place when he was in third grade. He was having trouble reading, but Raboy’s dad knew he liked music, so he gave him a children’s book called All About the Symphony Orchestra.

“It was a very sophisticated book,” Raboy recalls, and with a glance over his shoulder, he moves toward the bookshelves. “I still have it here somewhere, held together with electrical tape.”

The last page in the book is an excerpt of a Brahms symphony score. Raboy had no idea what he was looking at, so he took the book to his father and begged him to help him find a way to read the score.

“For my birthday that year, Dad got me the full score and recording of that exact piece,” says Raboy, holding up a tattered copy of Brahms’ Symphony No. 3. “I’d spend hours listening and looking until I understood it.”

By the time he was in sixth grade, Raboy was conducting the elementary school band, as he was the only student in the school who could read scores.

“It was never intended as a career, just an intellectual challenge,” Raboy admits. “But it eventually became inevitable.”

Raboy earned his bachelor of arts in music at Binghamton University in New York, then went on to achieve his master of fine arts degree from Carnegie-Mellon University in Pittsburgh. Since then, he has held positions of assistant conductor, co-director, conductor, music director, executive director, resident artist, guest conductor, and more for various philharmonics, orchestras, symphonies, and theater companies across the country, from New York to California and various places between. This includes a 20-year tenure as the music director of the Napa Valley Symphony in California, and his now-11 years of teaching and conducting at PUC.

Right now, though, Raboy is just looking forward to hearing his latest composition, The Beatitudes, composed in a mere four months at the end of 2017, performed for the first time. The performance will feature the PUC choir and orchestra, both including alumni and community members, and will highlight guest soloists. The concert will take place in Paulin Hall at 4 p.m. on Saturday, April 21. Admission is free.

“The music isn’t just loud and clanging,” Raboy explains. “It also includes heroic music, demonstrating hope for the future. It’s a journey of love and hope and a message of equality spoken to a group of people hearing it for the first time on that mountain. That’s the message I wanted to capture within that text. That’s the message of my music.”

A Tribute to Leadership at Pacific Union College