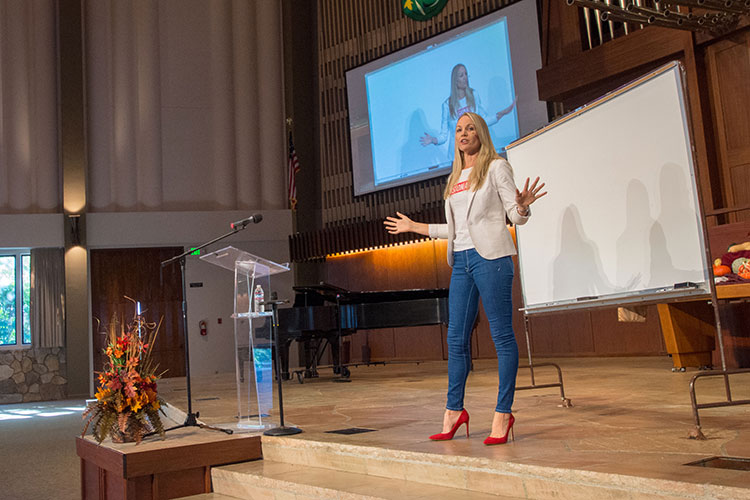 Shasta Nelson, author, speaker, and one-of-a-kind friendship expert shared insights about building lasting relationships at PUC’s November 8 Colloquy. Nelson’s resume is impressive, as she has appeared on the Today Show, been featured in numerous national magazines, and has contributed to the New York Times and the Huffington Post. She has also published two books, Friendships Don’t Just Happen and Frientimacy: How to Deepen Friendships for Lifelong Health and Happiness.

In her own words, Nelson explained a “friendship expert” is much more than an extrovert’s desire to make acquaintances.

“Whether as a pastor who was training and facilitating small groups, an author who has written two books about healthy friendships, or a speaker who teaches and trains others to respond to their loneliness, my entire career has been devoted to relationship growth and health,” she says. “Having studied friendships, loneliness, and relationship health for the last ten years, while running a company devoted to helping women build better friendships, and traveling the country hearing the stories of growing loneliness, my favorite thing to do is turn around and share what I have learned.”

Her devotion to sparking connections between people has blossomed into an exciting career in which Nelson has honed her interpersonal skills to best aid those around her.

She explained how her professional presence developed, saying, “Seeing a huge need for adults trying to figure out how to make new friends, in 2008 I started GirlFriendCircles.com, a website that was like a match.com for women looking for new friends. From there I started blogging, studying, reading, teaching, and giving media interviews on how we can make new friends and deepen our friendships in more meaningful ways.”

Nelson continued, “For me, playing to my strengths as a communicator and influencer in the area of my passion—relationships—was key to creating the career I have today as a speaker and author who helps bring people together.”

Now established in her field, Nelson’s schedule is filled to the brim. And while no two workdays are exactly the same, she explained she maintains focus by identifying three priorities on which to focus for that time, and does not clock out until those tasks have been completed.

At PUC, Nelson’s presentation centered around how to cultivate meaningful relationships as students, regardless of past friendship experiences.

“Loneliness,” Nelson began, “has less to do with not knowing enough people and more to do with needing to be truly known by a few.” She went on to cite an alarming statistic she came across in her research.

“Out of all age groups, 18-22 year olds are by far the most lonely,” she reports (Luhmann, Hawkley 2016). “Roughly 68 percent of those surveyed in that age category report they don’t feel known or understood by others,” she explained. “This number is much too high.”

Nelson then went on to liken loneliness to hunger and thirst. She explained like those physical sensations, loneliness is the body’s way of signalling it needs more connection, and desires more love than it is receiving. And how to meet that need comes down to three simple steps.

“If friendship could be written out as an equation,” Nelson explained, “It would look something like P + C + V = healthy relationship: Positivity, Consistency, and Vulnerability. Being in a healthy friendship means both members feel seen in a safe and satisfying way. It isn’t about finding the right person, it is just creating the right environment.”

She also highlighted the importance of this factor in male relationships in particular, point out men are often discouraged from being vulnerable with other men, and feel they are only safe to share this information in romantic relationships or with women only.

“This is not how it should be,” she emphasized. “Research shows people who maintain healthy friendships live better lives overall. We don’t know how, but even physical illnesses occur less often and less damagingly in those who enjoy solid connections with those around them.”

She closed by reminding those seated in the crowd they are loved and supported, urging listeners to identify when their needs for connection are not being met and to employ her strategy for building lasting friendships.

As she looks toward the future, Nelson hopes to expand upon the work she has done on an individual level and apply her skills to more “big picture” projects. She hopes to partner with organizations, teachers, leaders, and networks.

“I feel called to turn my attention to a macro-level where I can partner with others to help us turn this loneliness ship around,” she says. “Being a part of conversations where we ask how our healthcare institutions, churches, schools, technology, cities, and workplaces can better connect us is so important,” she emphasized.

Nelson acknowledged the difficulty in carrying out this task, but reaffirmed her commitment to making it a reality.

“It sounds like a daunting mission, but it also sounds like one of the most important things I could spend my life doing.”

Those interested in learning more about Shasta Nelson’s work are encouraged to visit her website, girlfriendcircles.com, featuring articles, quizzes, and a deeper look into creating lasting relationships.