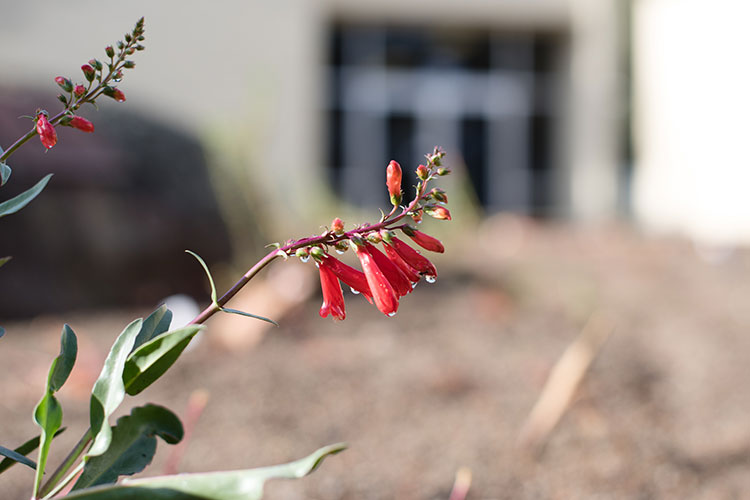 In fall 2017, Aimee Wyrick, chair of the department of biology at Pacific Union College, received a phone call from Nancy Lecourt, academic dean and vice president for academic administration. She invited Wyrick to meet her outside the Angwin Post Office.

“I was looking for ways to educate more people about the importance of native plants to insects and birds—the whole ecosystem,” says Lecourt.

As the women walked around the planter box outside the brick building, they discussed the plants currently growing there. Most were invasive species, and the large Hollywood Juniper in the center of the box was in a dangerous position.

“That tree is one of the most flammable plants used for landscaping,” explains Wyrick. “Plus, it was leaning toward a building and would eventually have been removed.”

That quarter, Wyrick had students in her Native Plant Cultivation class begin mapping out a new garden for that space; one that would feature native species, making the garden a healthier option for the local ecosystem.

One such student was Kari Stickle, a senior health sciences and Italian double major. As a passionate, self-proclaimed plant-lover, she not only produced many illustrations of the garden’s design, but also spent several hours outside of class weeding the plot on her own.

“My garden and yard at home are where I find peace and tranquility,” she says. “I can easily spend a whole day there weeding, transplanting, planning, and performing general maintenance. I need greenery around me.”

Stickle strongly believes proximity between people and plants is important, and feels the native plant garden at the post office will not only remind people of the benefit of being around plants, but also introduce them to local flora of the region.

“Most people aren’t the most aware of the immense diversity of flora our region has,” she says. “Native plants should be used much more in landscaping, and this garden plot shows people what those plants are, what they look like, how they grow, and how they can be used to landscape a yard. It’s a living and growing demonstration.”

Students in Wyrick’s Propagating Native Plants class worked on planning the garden. They studied conditions needed for various native plants, learned to propagate many of them in the department’s greenhouse, observed sun and shade patterns in the garden plot, studied potential effects on surrounding nature, and spent hours digging out the previous invasive vines and plants.

Cheryl Elmendorf, a then-local adult learner who has always been fascinated with plants and decided to take several biology classes to expand her knowledge, was part of that class. Her passion for native flora across the U.S. fuels her joy in sharing local knowledge with the community.

“Having the native plant garden in a busy area hopefully means the community can see up close many of our local native plants and observe them through the seasons,” she says. “These are plants and flowers that may never be seen unless one knows where to search and what to look for out in the wilds of Northern California.”

“Projects like this provide an opportunity for students to apply their knowledge to the real world,” Wyrick says. “Our modern world tends to overlook plants and may not understand the importance they serve to wildlife and humans alike. I appreciate the genuine interest the PUC students have in learning more about native species and their commitment to a long-term project of this sort.”

In preparation for the planting, the PUC landscaping team applied herbicide to kill an invasive plant, tilled the bed, and removed several of the pre-existing ornamental species, including the large juniper. Several faculty and staff also volunteered to weed the bed and donated plants.

The new garden was installed in the planter between Silverado Credit Union and the Angwin Post Office on Nov. 4. Wyrick and Lecourt were joined by Rachelle Davis, chair of the department of music, for the planting. Though the garden will take a few years to fully establish, the department of biology will continue to tend it, adding plant identification markers and interpretive signs to educate passers-by about the biology and ecology of the plants in the garden and the animals they support.

“I hope to see the garden plot still growing in 20 years,” says Stickle. “Ideally it would be maintained by a club of botany nerd students and Angwin locals.”

Elmendorf also sees the garden ushering in the future of PUC. “This particular garden goes hand-in-hand with preservation of PUC’s Forest Legacy Project,” she points out. “Hopefully both of these projects will raise student and local awareness to how amazing each plant in nature is, how relaxing spending even a little time in these areas can be, and how awesome God is to create this magnificence for us.”