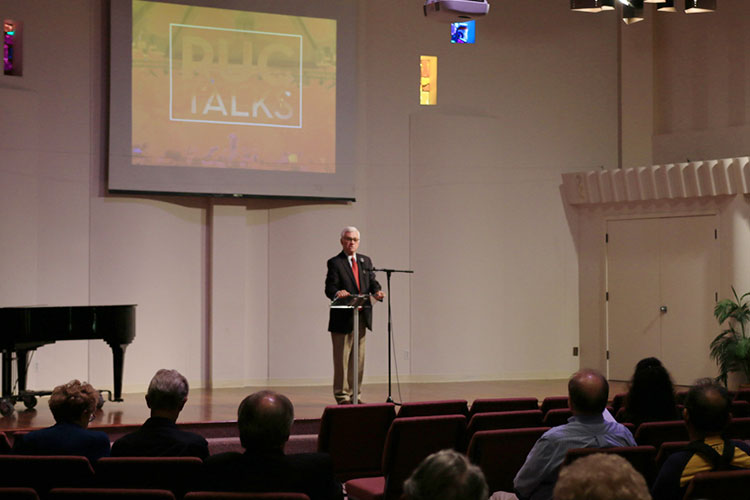 The festivities of Pacific Union College’s Homecoming Weekend 2017 began with the third annual PUC Talks Friday afternoon, April 21. This recent tradition is a series of mini lectures modeled after the popular TED Talks, in which speakers share exciting new ideas. This year, the featured speakers were Dr. Jean Sheldon, Dr. Nancy Lecourt and Mr. Peter Lecourt, and Dr. Vola Andrianarijaona. “We would like to introduce you to the kinds of things we do in our classrooms,” said President Eric Anderson, in his introduction. The topics sparked lively discussion and engaged both visiting alumni and students in attendance.

God’s Will Vs. Human Will

Dr. Jean Sheldon, professor of Old Testament, has taught at PUC for over 20 years, and specializes in Hebrew Bible and the ancient Near East. Her talk, titled, “Two Competing Voices: A Canonical Approach to Solving Ethical Issues in the Old Testament,” analyzed violence in the Old Testament from an ethical perspective. Dr. Sheldon explained her topic was inspired by questions she has been asked through the years by students in her interactive, discussion-based classes. She evaluated God’s will versus human will, which often demands a different choice, and found in that conflict God allows that will to dominate the narrative, to a certain extent, and often even acquiesces to the human will so it comes to be seen as the “acceptable” view.

Dr. Nancy Lecourt and Peter Lecourt’s presentation, titled “Saving Our Land: The Future of a Unique Heritage,” was an engaging conversation about the college’s land. Dr. Lecourt has served as academic dean and vice president for academic administration at PUC since 2006, while her son Peter recently completed a master’s degree in geographic information systems at the University of Redlands. They described PUC’s partnership with the Land Trust of Napa County, the progress on the purchase of a $9 million conservation easement, and the creation of an endowed fund to ensure ongoing sustainable management of over 850 acres of PUC’s forest land. When asked if future administrations would share the philosophy of protection and conservation of the forest, Dr. Lecourt said, “We want to remember our heritage, who we are, and we think the land is part of that,” noting the college is currently creating a new strategic plan. “We intend to make sure the plan paints a vision that includes the land as part of where PUC goes in the future.” If you would like to help support this endeavor, donate to the PUC Forest Fund, visit puc.edu/give.

The Beauty of an Ion Beam

Dr. Vola Andrianarijaona, professor of physics, has taught at the college since 2006, and specializes in lasers, solid state physics, and atomic, molecular, and optical physics. During his talk, titled “Why an Ion Beam?” Dr. Vola, as he is known, told the audience he conducts research for the benefit of PUC students. He gives them the opportunity to conduct research at nationally recognized laboratories and participate in prestigious conferences where they can present their work. Thanks to a $170,000 grant Dr. Vola received from the National Science Foundation, he has involved students in his research measuring the energy levels of hydrogen beams. During his talk, he shared updates on his research, student projects, and highlighted students who have had their research published in peer-reviewed journals or presented at conferences.