Kent Davis Honored as PUC’s 2017 Educator of the Year 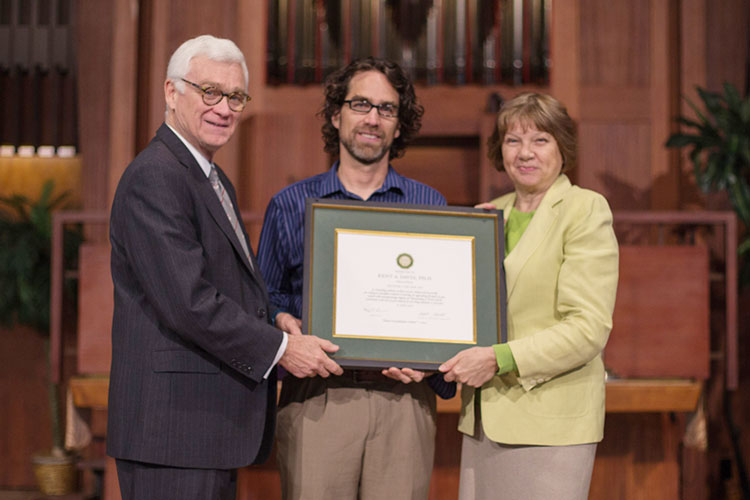 Professor of chemistry Dr. Kent Davis was named 2017 Educator of the Year during PUC’s annual colloquy program, Thursday, April 27. Students, faculty, staff, and administration celebrated with Davis as he was recognized with the award for the first time. Davis has been teaching at Pacific Union College since 2002 and currently serves as the chair of the department of chemistry.

Each year, the Educator of the Year award is selected by student vote. The recipient’s identity is a highly-kept secret. President Eric Anderson began the service reminding the audience why the special assembly exists in dedication to an outstanding teacher. “It’s a reminder that PUC has been built upon great teaching. You will get a sense of that if you look around our campus and look at the names of our buildings,” he said, noting most buildings at the college are named after great teachers, instead of dignitaries or donors. “It is recognition of good teaching, spiritual leadership, and service to the college.”

As is tradition, assistant professor of communication and department chair Michelle Rai, last year’s titleholder, gave a short speech before revealing the 2017 award recipient, encouraging students who aren’t sure of what they will do after graduation. Sharing photos and stories of her career, she pointed out God’s leading in her life, and assured students they would someday see the same leading in their own lives. “God knows, and He’s giving you experiences you might not understand right now but you will see later, maybe in 20 years, how He’s paid attention to every little thing you do.” Rai then invited Davis to the platform to receive the award as the sanctuary exploded with cheering and applause for the popular professor as he took his place on the lone chair on the platform.

Davis’ wife, professor of music and chair of the department of music, Dr. Rachelle Davis, enthusiastically narrated a slideshow playfully poking fun of him and his various hairstyles through the years. She shared stories and anecdotes of Davis and his many interests, including bread making, reading with his children, running, and biking.

Senior chemistry major and Maxwell Scholarship winner Armando Camacho shared a touching tribute to Davis and the positive impact he has had on his life. As a first-generation student, Camacho struggled with understanding his place in higher education. He praised Davis for his continual guidance and reassurance, explaining it built his confidence and helped him feel like he belonged at PUC.

Each speaker expressed how much they appreciated working with Davis, with accolades from Dr. Robert Wilson, associate professor of chemistry, and Dr. Georgina Hill, professor of English. She praised him for his dedication to teaching, saying, “As you’ve heard, Davis takes flour, water, the air, and turn it into astoundingly delicious sourdough bread, especially good with his homemade goat cheese. He also takes the complexity of chemistry and patiently explains it until there is clarity, and he is quite good at sorting out the trivial from the important, but I would argue his best feat is turning complacency into curiosity.”

Dr. Davis joins an elite group of men and women who have dedicated their lives to inspiring and educating PUC students and we thank him for his continued commitment and service.