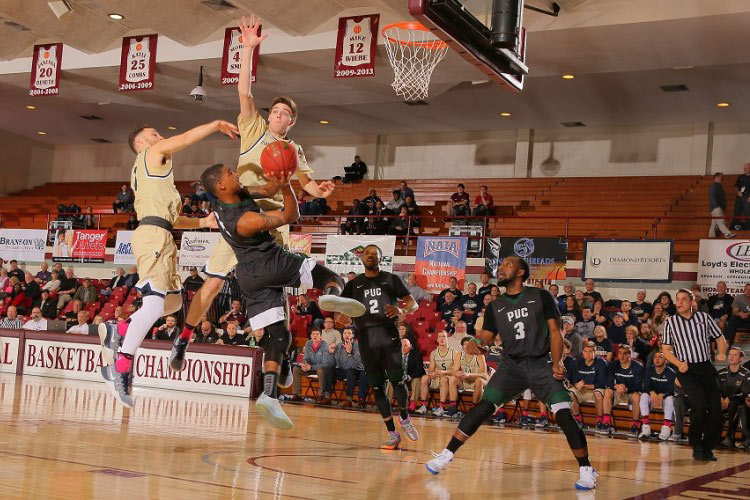 On Wednesday, March 8, the eighth-seeded Pacific Union College Pioneers men’s basketball team took on the first-seeded Cornerstone University Golden Eagles in the opening round of the 26th annual NAIA Division II Men’s Basketball National Championship at the College of the Ozarks in Point Lookout, Mo. After a dominating first half, PUC’s run came to an abrupt halt when Cornerstone took control over the final 20 minutes to pull out an 89-83 win. Despite their heartbreaking lost, the Pioneers raised eyebrows and turned heads at the national level with a stellar performance for their first appearance in the NAIA national tournament.

The Pioneers, who had won their last eight games—the last three by a combined total of six points that included two buzzer-beaters—came out hitting on all cylinders, shooting almost 64 percent in the opening half, including 10 of 17 from the 3-point line. Their largest lead came with just under a minute to play in the first half on the third triple from junior Ben Jazuk to go up 55-29, but the Golden Eagles picked up the defensive pressure and chipped away at the 25-point halftime deficit and found a way to advance into the second round.

With the setback, the Pioneers had a seven-game win streak snapped but concluded their magical run with an 18-7 record this season. PUC set school records for wins in a season and wins in California Pacific Conference play as the Pioneers made an impressive run into their first appearance in the NAIA national tournament.

As dominant as PUC was in the first half, CU was just as dominant in the first 13 minutes of the second period, making up 18 points on the seemingly insurmountable 25-point lead the Pioneers had built over the first 20 minutes. CU’s Michael McLaughlin picked off a pass and converted the layup at the 6:39 mark to give the Golden Eagles their first lead since the first three minutes of the contest. Cory Cox led CU’s resurgence with a game-high 26 points, 15 coming off five triples in the second half. Cox triggered a 14-0 run that brought the Golden Eagles from eight down to up by six, 74-68, with 4:25 left to play.

PUC cut the led to just three on a 3-pointer from Jayson Marquez with 1:52 remaining, but CU’s leading scorer Kyle Steigenga grabbed an offensive board, put back the miss, and was fouled on the play. His free throw put the Golden Eagles up for good, 79-73, with 0:48 left. CU converted its free throws down the stretch to seal the victory. The Golden Eagles shot 64 percent over the final 20 minutes, 56 percent for the game, and had a tremendous 27-5 advantage at the free throw line.

PUC had five players reach double digit scoring in the game. Noel Briones matched his season-high total with 13 points, Jazuk added 11 points, and Marquez, Anthony Adams-Rule, and LeRoy Anderson each scored 10 points for PUC. Jazuk went 3 for 5 from beyond the arc, Brandon Franklin drained both of his threes, and Marquez, Anderson, and Briones each connected on 2 of 3 from deep as the Pioneers finished the game hitting 14 of 29 3-pointers, but only 4 of 12 in the second half. Devon Pinnock handed out four assists, and Anderson had seven rebounds.

Join us in congratulating all of our student-athletes for their outstanding accomplishments this year! For more information, visit pioneersathletics.com.