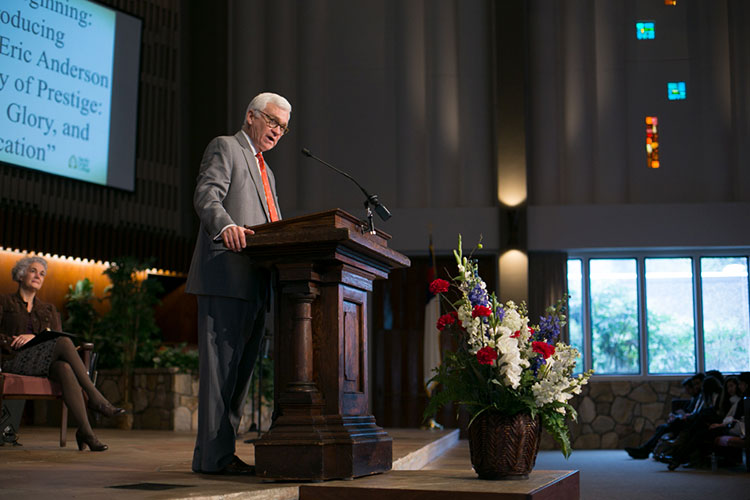 In the opening Colloquy of the new quarter, Dr. Eric Anderson, the newly elected president of Pacific Union College, gave his first address to campus, on Thursday, January 11.

The service began with a prayer from Chaplain Jonathan Henderson, who appealed, “We pray that Your spirit is still present, that we are engaged by Your spirit and moved by Your spirit. Father, direct us as we move forward. Fill this place. May we see, feel, and know that You are here.”

With the Martin Luther King Jr. holiday on Monday, many segments of the service were dedicated to his memory. Dr. William Chunestudy, associate academic dean for distance and adult learning, lead the PUC octet and congregation in singing “Leaning on the Everlasting Arms,” the song sung at Dr. King’s first civil rights movement meeting.

Dr. Sylvia Rasi Gregorutti, chair of the department of world languages and cultures, read Philippians 1:27-2:4, followed by a powerful rendition of “Ain’t Got Time to Die” by the octet, which elicited strong applause and cheers from the congregation.

Dr. Nancy Lecourt, vice president for academic administration and academic dean, introduced Anderson, welcoming him as the twenty-second president in the college’s 135-year history. While she detailed many of his accomplishments, she also shared several anecdotes typically not included in most presidential profiles. For example, Lecourt noted Anderson is known to be approachable, likes to play practical jokes on his colleagues, and once fired a Civil War era replica pistol during a class. Perhaps most infamously, Anderson drives a yellow pickup truck dubbed “Colonel Mustard.” Lecourt also commended him for his high standards and commitment to PUC.

Anderson began his talk by urging students to not simply treat Monday as a day to sleep in, but to reflect on the National Day of Service celebrating King’s legacy. And not only to reflect, but to act. He urged faculty, staff, and students to fulfill the college’s mission by volunteering for a local community service project that day.

Anderson shared one of his favorite mottos, from the state of North Carolina, Esse Quam Videri, meaning “To be rather than to seem.” He believes PUC, like all Adventist colleges, must preserve and strengthen what they have, to continue to produce virtuous graduates, and become even more of a valuable asset within their communities.

“I would like to see our College on the Mountain do such a good job integrating religious knowledge and spiritual formation into its curriculum, so clearly explicate the role of Christianity in western civilization, and so articulately challenge relativism and materialism, that Christians around the nation will sit up and take notice. Certainly if we follow God’s leading we will be blessed beyond our greatest imagination, and blessed is a better word than prestigious,” Anderson said.

Before closing prayer, the Healdsburg bell was rung to signify the beginning of Anderson’s presidency, followed by a reading of “Ain’t Gonna Let Nobody Turn Us Around,” one of Dr. King’s prayers, by Brandon Parker, the college’s recently appointed vice president for financial administration. After the service, Anderson greeted students, faculty, and staff in the Dining Commons for conversation and light refreshments as another chapter in PUC’s history unfolds.