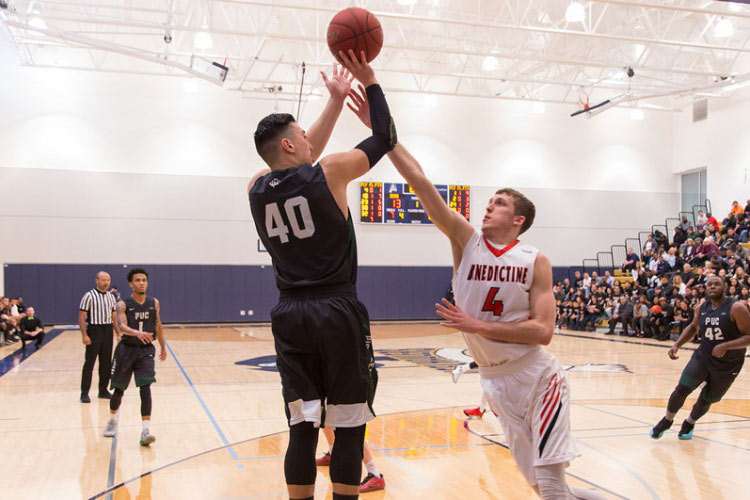 The Pioneers men's basketball team punched their ticket to the California Pacific Conference championship game with their semifinal win over Benedictine-Mesa, 78-75, Sunday evening, February 26. The Pioneers will play Cal Maritime on Tuesday, February 28, in the finals in Vallejo, Calif.

The Pioneers and Benedictine opened the game with a consistent exchange of points; however, the Pioneers went on a 17-5 run to pull ahead 33-15 with just over four minutes left in the opening half. Going into the locker room at halftime, the Pioneers had a comfortable 18-point lead over the Redhawks.

With no major momentum changes until two minutes into the second half, the Redhakws went on a 7-0 run, cutting their deficit to 67-59. The Redhawks continued to chip away at the Pioneers lead and with less than two minute on the clock, found themselves down by only four points. Chad Young, a senior from Carson, Calif., sunk two free throws to give the Pioneers a slim 78-72 lead. Despite a PUC turnover, the Redhawk final shot attempts missed, securing a historic win for the Pioneers.

Brittany Brown, the college’s athletic director, congratulated the men on their win, saying, “This group of guys have been working hard day-in and day-out since August. Their success on the court is a result of their willingness to commit to each other and a style of play that involves disciple, selflessness, and character. It is a special experience when you get to reap the benefits of your hard work. Congrats to Coach Rahn and the entire men’s basketball program!”

The Pioneers will continue with their historic season Tuesday, February 28, at 7:30 p.m. against Cal Maritime in the finals. This Pioneers squad is first men's basketball team to make the California Pacific Conference finals in school history.