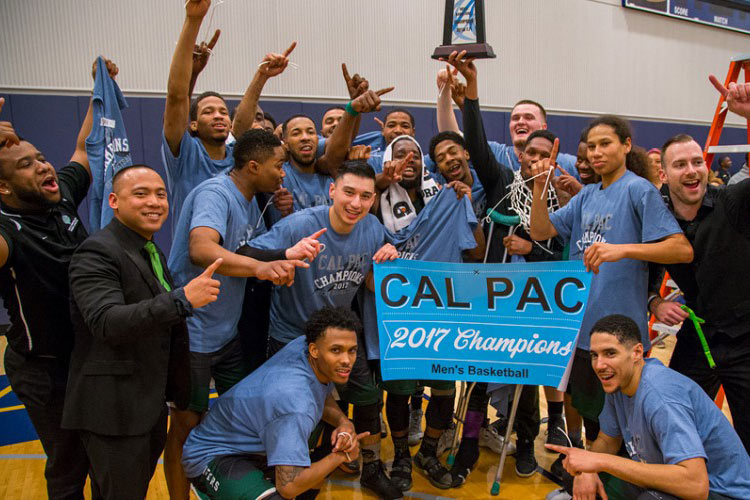 The Pioneers began their championship debut struggling to find their rhythm. At halftime, they were trailing the Keelhaulers by 10 points.

Once again, their defensive effort swung the momentum of the game their way, as they went on a 10-0 run to open the second half. The crowd would find no relief in their school's lead, as both teams tied six times throughout the second half. It came down to the last possession, just as it did on Feb. 18 when PUC Pioneer Jayson Marquez, a junior from Harlem, N.Y., hit a three-pointer with less than a second remaining to beat CSUM by one in the regular season finale.

With less than a second left in regulation, PUC Pioneer Rae Hubbard, a junior from Fairfield, Calif., drained a shot to secure the 71-70 win and the California Pacific Conference Championship title.

“It was the greatest basketball game I’ve ever seen live. I’m so proud of the team, they played their hearts out and really deserved this win. It was great to see so many students, alumni, faculty, and family members come out and support the Pioneers. The crowd support was unmatchable,” said PUC alum Cameron Mitchell.

Hubbard led PUC with 14 points, hitting 4-of-7 from the 3-point line. Marquez had 13 points, while Devon Pinnock, a junior from Harlem, N.Y., added nine points and seven rebounds.

Cal Maritime finished the season 20-12, falling victim to free-throw errors, missing four out of six attempts in the final minutes of the game. Keelhauler Daniel Radford led all scorers with 21 points, hitting 12-of-16 from the line, while Phil Randles finished with 18 points, and Travis Arenas added seven points and eight boards.

The third-seeded Pioneers (17-6) have set school records for wins in a season and advanced farther than any other team in school history. The Pioneers will represent the Cal Pac at the NAIA National Tournament, which begins on March 8 at the College of the Ozarks in Point Lookout, Mo.