By Amanda Navarrete and Cambria Wheeler on March 13, 2015 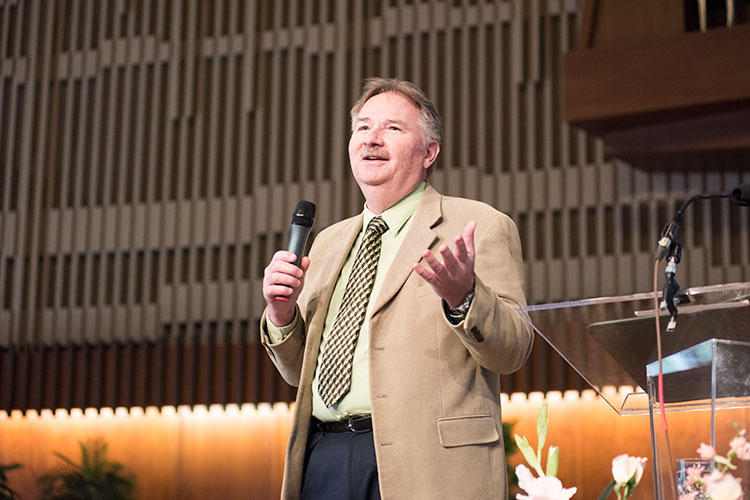 Pacific Union College hosted its 34th annual Career Day on Thursday, March 5, welcoming professionals from a variety of fields such as business administration, psychology, social work, and education. Career consultants filled the side rooms of the Dining Commons to meet with students after Marlin G. Meharry, D.D.S., an award-winning dentist, spoke for the Colloquy Speaker Series earlier in the morning. Meharry inspired future members of the workforce with stories of his time as a missionary dentist working in the Marshall Islands, Kenya, and Japan.

“The most satisfying times in my life were when I lived overseas and did dentistry for free,” Meharry explained in his Colloquy presentation. Meharry graduated from Pacific Union College in 1976 and Loma Linda University School of Dentistry in 1980. He began his journey of service as a traveling dentist in the Marshall Islands, and after a brief posting in Taiwan he moved to Japan, where he became the director for clinics associated with the Adventist Medical Center in Naha, Japan and started a family (his daughter Tanya Healy serves in academic administration at PUC).

From 1989 to 1995, Meharry led the Seventh-day Adventist dental clinic in Nairobi, Kenya. Under his tenure as director, the clinic flourished, becoming the preferred dental clinic for members of the United States Embassy and the United Nations. During the Colloquy program, Meharry shared vivid stories of serving patients from the mobile dental clinic he outfitted in his Land Rover. Meharry now serves his community in Harvey, North Dakota, as a dentist and a member of various civic boards. In 2011, Meharry’s peers recognized his dedication and hard work by nominating him for the North Dakota Dental Association’s Outstanding Achievement Award for his participation as a volunteer in local healthcare projects and his lifelong commitment to dental care overseas.

Meharry talked about living by faith and service, and encouraged students to do the same. “If you do what God wants you to do, I promise you, you’ll be happy,” he told students. He concluded by saying, “When we do what is right, for God and us, then we will know what service really means.”

After Meharry’s presentation, students rushed up to the Dining Commons to meet with dozens of career counselors. The students were able to ask questions and discuss potential jobs with representatives in their area of interest. Freshmen and seniors alike were able to network with professionals as well as ask any questions about the representatives’ jobs, companies, and fields.

“Career Day is an opportunity to explore the world of work with individuals who are actively employed in the professions they represent,” said Laura Gore, organizer of the event. The event allowed students to plan for the future and develop confidence in knowing where their major could take them.

The annual Career Day event has benefitted students and connected their college study to the opportunities that follow graduation. In past years, students have made connections with career consultants that led to eventual employment offers.