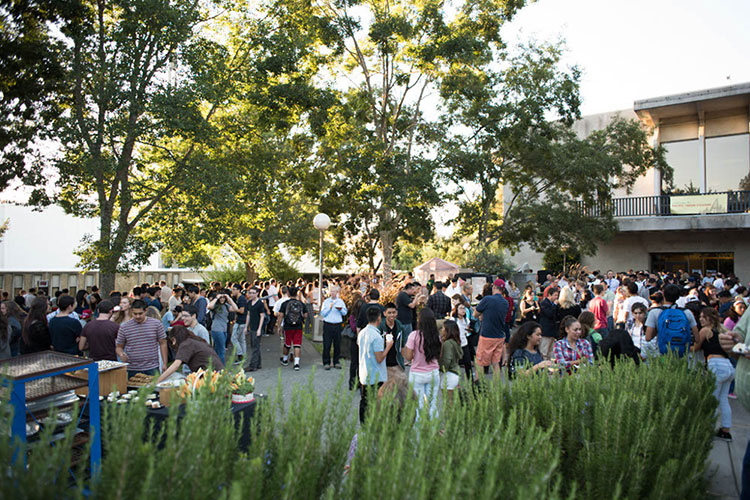 As the classes began on September 22, both new and returning students started the school year right with the annual Week of Welcome celebration. Through an array of social, spiritual, and academic events, the PUC community was reunited following summer vacation.

To start off the week, students filled the campus mall on Monday for “A Taste of San Francisco” welcome back dinner, and enjoyed a buffet of food such as Boudin sourdough soup rolls, gnocchi, and potato tacos. Ana Delgado, a junior, was excited to see all the new faces on campus at the celebration. “I’m looking forward to seeing even more diversity on campus than before because of all the freshman. There’s a lot more people so it feels like a bigger campus family,” she said.

Students had a chance to promote and join clubs that catered to their interests and majors, such as the Business, Music, and Pre-Law clubs. Alicia Nieb, co-president of the Business club, noted, “The business club is especially excited for this new school year, and for our new and returning members!”

On Tuesday night, students filled the benches to cheer on the Pioneers volleyball team against Cyclones of Mills College. The Student Association (SA) provided snacks and refreshments during the game.

SA also hosted a giveaway for students for $50 to the College Bookstore. David O’Hair, Campus Chronicle editor-in-chief, noted that around 50 people participated in the giveaway.

The fun continued on Wednesday night as students headed down to the Campus Center for free pizza, popcorn, and a screening of The Lego Movie. It gave the students a chance to take a break from studying and to socialize with one another.

On Thursday, Dr. Leonard Bailey opened PUC’s Colloquy Series with his wife, Nancy Bailey, R.N., M.S. Dr. Bailey is an internationally recognized heart surgeon who performed the first infant heart transplantation in October 1984. Students had the opportunity to listen to his lecture, “Be a Pioneer,” as well as participate in the annual traditions celebrated during Opening Convocation.

Students had a chance to give back to the community Friday afternoon with Rebuilding Calistoga, where a group made a trip up the valley to help out senior citizens.

To bring in the Sabbath, vespers took place in the PUC Church Sanctuary, as students worshipped and praised together, and had a chance to listen to Jonathan Henderson, PUC’s new campus chaplain. Following vespers, students mingled at Friday Night Live in the Campus Center, and Interactions in the Fireside Room.

On Saturday evening, students had fun speed dating, allowing them to meet new people. Pizza was provided, as well as a pool party that included a game called “Splash for Cash,” where students jumped in the pool to collect $300. Early Sunday morning, the Campus Center was full again with a meal packaging event that assembled 10,000 meals for those in hungry around the world.

To close the weekend, the Music Club hosted “Open Mic Night” in the Campus Center. Students showed off their instrumental and vocal talent to their peers. Sammy Martinez, a returning senior who spent the last year studying abroad in Spain, said, “The week’s activities were done in such a way that made it easy to hang out with old friends, and also make new ones.”