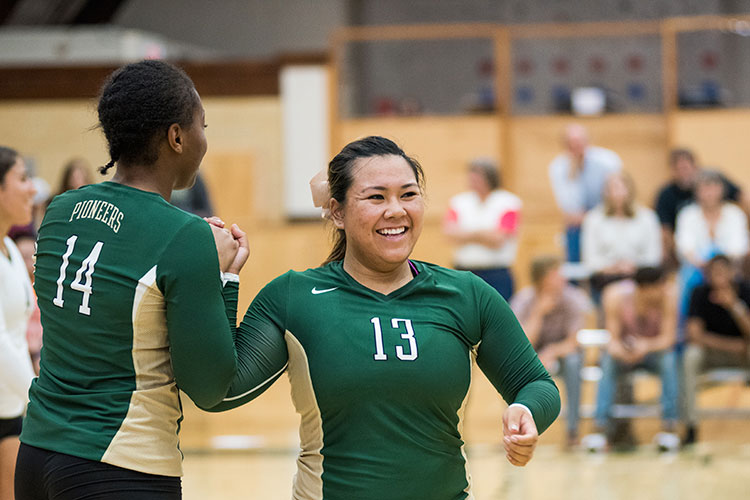 Four of the six Pioneers athletic teams—women’s volleyball, men’s soccer, and the men and women cross country team—began their seasons this fall, representing PUC with their promising talent at both home and away games.

Since the preseason in August, the members of the Lady Pioneers volleyball team have given their all on the court, touring in the Pacific Northwest and southern California. The weeks of touring left them 6-6 before their games against Mills College and UC Santa Cruz. Currently, the women’s volleyball team stats are 9-7 overall and 1-1 in California Pacific Conference league play.

The first home game against Mills College filled the college’s Pacific Auditorium for a dominating win against the visiting Cyclones. "The Cyclones did a really great job of challenging our offense by digging us a lot tonight,” said Head Coach Brittany Brown following the game. “Despite a few dips, I was overall pleased with the way we played and was excited to have many different contributors.”

The men’s soccer team played their first home game on Oct. 2 against Marymount California University. Their next home game will be on Sunday, October 5.

As the teams continue their seasons, PUC students have the opportunity to come out and support the Pioneers, show school spirit, and celebrate the accomplishments of the school’s varsity student-athletes.

You can continue following the progress of the PUC Pioneers teams, including the men’s and women’s basketball teams, online.