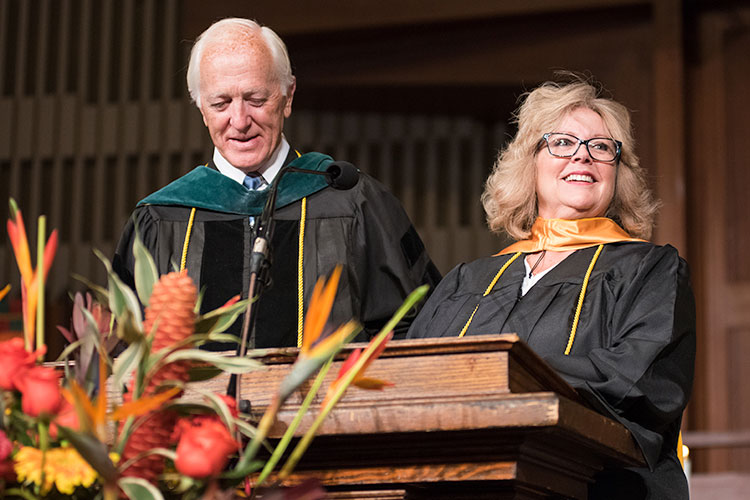 PUC’s student body, from excited freshmen to seasoned seniors, packed into the PUC Church on September 25 to attend the first gathering of fall quarter’s Colloquy Speaker Series. After professors and administration had marched into the building in full regalia, and the string section from the PUC Orchestra had performed a rendition of Vivaldi’s “Summer,” PUC President Heather J. Knight took the podium to introduce the Opening Convocation speaker, Leonard Bailey, M.D.

Dr. Bailey’s presentation was entitled “Be a Pioneer,” an appropriate title for a lecture given to a college that has long been known as a pioneering institution. In her introduction, Knight noted that the podium on the platform was used by Ellen G. White, a pioneering founder of both the Seventh-day Adventist Church and Pacific Union College. PUC was founded in 1882 as Healdsburg Academy, and is one of the oldest colleges in California. The college continues to embody the pioneer spirit, even naming the varsity teams the PUC Pioneers.

Dr. Bailey and his wife, Nancy, R.N., began their presentation discussing what makes someone a pioneer. On whether ordinary people would be able to become pioneers in new areas, Dr. Bailey was encouraging, yet practical. “Pioneering doesn’t happen by accident,” he explained. “It may not be for everybody.” He emphasized that those striving to become pioneers must be willing to make difficult choices, prove their leadership, and, above all, have an eager curiosity for how to make the world better. “Everyone in this room has pioneering potential,” Dr. Bailey affirmed to his audience.

In 1984, the eyes of the world were on Dr. Bailey and Loma Linda University when he performed the first infant heart transplantation on the baby known as Baby Fae, replacing her defective heart with one from a baboon. Although Baby Fae lived only 20 days after the operation, the procedure revolutionized the field of congenital heart surgery; Dr. Bailey performed the first successful human-to-human heart transplantation just one year later.

Dr. Bailey shared the interviews and media responses to Baby Fae’s surgery, including the backlash he faced when the operation didn’t save her life. However, he ended his presentation with many filmed testimonials from individuals who underwent successful infant heart transplantation, showcasing their happy, fulfilling adult lives. The encouraging message of these testimonies shows that despite occasional failure, hard work, and discouragement, pioneering is truly worth every minute. Dr. Bailey’s conclusion was echoed by the resounding peals of the Healdsburg Bell, following the students out of the sanctuary and back to a new and bright school year.