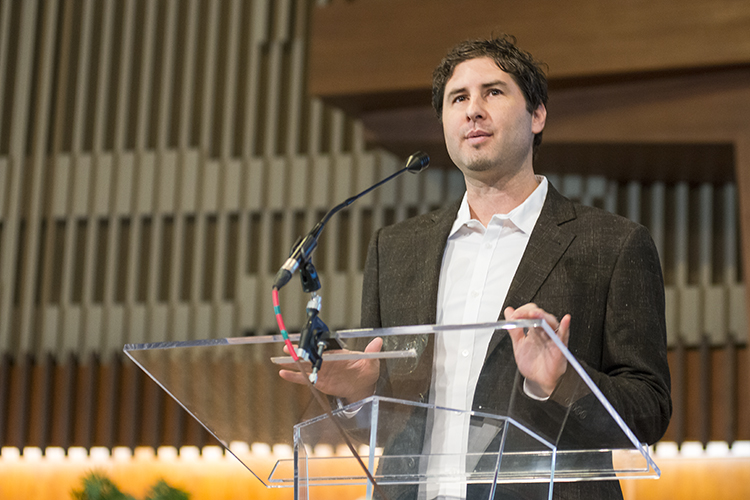 Pacific Union College hosted critically acclaimed author Matt de la Peña during the May 1 installment of the Colloquy Speakers Series. de la Peña, the award-winning author of five young-adult novels and the picture book A Nation’s Hope: The Story of Boxing Legend Joe Louis, inspired the campus with the story his personal path to literacy.

de la Peña was introduced by a professor who played a pivotal role in his development as a reader and writer: PUC’s own president, Heather J. Knight, Ph.D. Knight taught de la Peña during his time as a student at the University of the Pacific, and described her former student as a “successful, prolific, and accomplished young writer.”

However, as de la Peña explained, his career as a writer was completely unexpected. Describing himself as a “reluctant reader” through most of his childhood, de la Peña never finished a book in high school. As the son of teenage parents from National City, Calif., “literature was something that belonged to the kids in the richer families,” said de la Peña.

The author urged PUC students to not let circumstances or the assumptions of others determine their paths. “You’re going to deal with a ton of definition, from parental, professional, to personal,” he declared. “The most difficult to break away from is personal definition.”

Despite the environment and expectations of his childhood, de la Peña set the goal of going to college to study psychology and meet new people. Since he knew his family could not afford the tuition, he worked incredibly hard in the hopes of earning a basketball scholarship to pay his way through college.

de la Peña’s hard work paid off, and he attended University of the Pacific on a full basketball scholarship. That was where he met Knight, who handed him a copy of the novel A Color Purple and encouraged him to read it. Though he initially struggled with the book, the former reluctant reader stayed up until four o’clock in the morning finishing the book while on a trip with the basketball team.

Realizing that he would become a professional basketball player in the NBA as had been his plan, de la Peña, inspired by the joy he found as a closet poet and the characters he had met in A Color Purple, decided instead to pursue writing. “I went in search of that feeling in other books and became an avid reader, wanting to share that feeling in others,” he said. He encouraged all aspiring writers in the audience to dive in to literature: “You can never be at least a good writer unless you’re first a great reader.”

de la Peña took time during his presentation to describe how his father became a voracious reader. While de la Peña was pursuing his M.F.A. in creative writing at San Diego State University, his father asked to read one of the novels he had been assigned, A Hundred Years of Solitude by Gabriel García Márquez. de la Peña’s father fell in love with reading, devouring the books de la Peña was reading in his master’s program and eventually finding books to read at his local library.

Ultimately, de la Peña’s father went on to receive his GED, his associates degree, and finally his bachelors degree in literature at the University of California Santa Cruz. He now teaches Spanish to third graders.

Now the author of books including We Were Here, Ball Don’t Lie, Mexican WhiteBoy, I Will Save You, and, most recently, The Living, de la Peña’s inspiring story entertained and inspired students. “The path to literacy makes you a better person,” de la Peña concluded. “When someone hands you a book, they’re changing your life.”