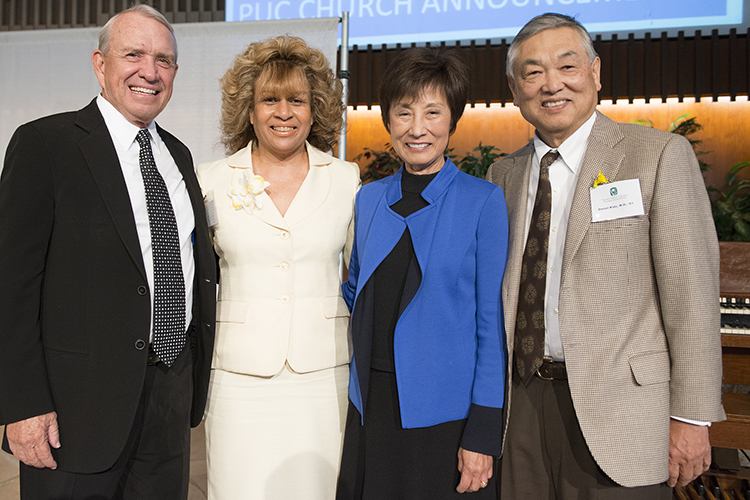 Since 1882, Pacific Union College has been preparing students for a lifetime of service to God and humanity. From April 25-27, the college welcomed alumni back to its Angwin, Calif., campus to celebrate that heritage, share special memories, and to recognize the impact of PUC graduates. During the Homecoming Weekend festivities, the college recognized a group of alumni that have made significant contributions as the 2014 Honored Alumni. The annual Honored Alumni awards are given to individuals who are truly representatives of the PUC Pioneer spirit, and this year’s recipients were no exception.

During Sabbath morning worship service, PUC President Heather J. Knight, Ph.D., presented the first award to the 2014 awardees. First to be honored was Lawrence Longo, M.D., pioneering researcher and founder and emeritus director of the Center for Perinatal Biology at Loma Linda University. Longo graduated from PUC in 1949, and established the Frank A. and Florine A. Longo Lecture series at his alma mater in 1993. Though Longo was unable to attend the service, his daughter Celeste de Tessan came to accept the award on her father’s behalf.

The next recipient was Joe L. Wheeler, Ph.D., a 1959 graduate of PUC’s history department and a beloved and prolific author of books including the Christmas in My Heart and Great Stories Remembered series. After accepting the award, he encouraged the congregation of students and fellow alumni to never accept the limitations of age. “As long as the Good Lord gives us strength and marbles … I guess we’ll keep going,” Wheeler said. “In order to keep coming to alumni, I want to encourage you all to never, never retire.”

Daniel Kido, M.D., ’61, was recognized for his nearly 50 years of contributions to the medical field as a leader, researcher, and author. Kido has charted a diverse path in neuroradiology and education, teaching at Harvard Medical School and leading one of the largest neuroradiology departments in the world as Chief of Neuroradiology at Washington University. Now a professor at Loma Linda University School of Medicine, Kido encouraged students to dream big: “When I was at PUC, I didn’t dream that I would ever have a chance to do all of this … and yet the dreams that started all of this began at PUC.”

Following Kido’s acceptance, Knight presented an Honored Alumni award to Fred M. Lee, Class of 1962, recognizing the unique perspective on healthcare outlined in his bestselling book If Disney Ran Your Hospital—9 ½ Things You Would Do Differently. Lee honored his parents, longtime missionaries and PUC alumni Milton and Helen Lee, in his acceptance speech. “It’s such an honor to get this award—I feel a bit like an imposter growing up in the shadow of my two parents,” the author and former hospital vice president said. “To me they set a bar so high I’ve never felt like I could ever achieve that kind of commitment.”

Elissa Kido, Ph.D., ’64, was honored for her work leading the CognitiveGenesis research project as director of the Center for Adventist Education K-12 at La Sierra University. “Never in my lifetime did I believe that we would have a film on PBS, nor that I would have a small role in it,” she stated. “That goes all the way back to my time at PUC where I became beneficiary of Adventist education.” Kido shared that she met the two most important individuals in her life at PUC: God and her husband Daniel.

In addition to the recognitions given to the Honored Alumni, on Friday evening, April 25, the Honored Pioneer award was presented to Bill Hemmerlin, Ph.D. The Pioneer Award is given each year to a non-alumnus who has made a significant impact at Pacific Union College, and Hemmerlin was a truly deserving recipient. The beloved educator, a member of the department of chemistry faculty from 1979-2010, was honored for his decades of service as a professor, department chair, and advisor to hundreds of students on their path to medical and dental school. Hemmerlin, now a professor emeritus, was a two-time recipient of PUC’s Educator of the Year award and continues to serve as a PUC ambassador by traveling throughout California and beyond with the college’s alumni relations team, often interacting with former students who benefitted from his compassionate mentorship.

Those interested in hearing more of the Honored Alumni’s perspective on the Church and Adventist education can find the Alumni Sabbath School and Worship Service online at http://new.livestream.com/pucchurch.