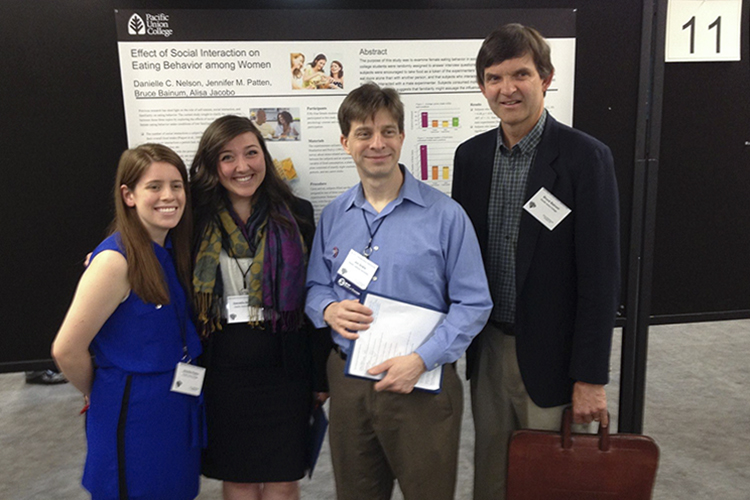 A group of students and faculty from Pacific Union College’s department of psychology traveled to Portland, Ore., to attend the annual convention of the Western Psychological Association (WPA) on April 24-27. Approximately 29 PUC students attended the convention, accompanied by professors Bruce and Charlene Bainum, Aubyn Fulton, and Priscilla Miranda. Of the PUC research papers presented at the convention, three received awards.

Four of the six PUC poster presentations were presented for Psi Chi, the elite national psychology student honor society, three of which won the Psi Chi Regional Award. Historically, PUC students have won two Psi Chi awards in one year, but this was the first year they took home three. “It was a really fabulous learning experience for the many students who came, and I was so proud of the presenters and the award winners,” said Charlene Bainum, professor of psychology.

At the convention, the PUC group presented on a variety of topics: the effect of emoticons on memory, how peers perceive social networking profiles, eating behavior and social interaction, video games and their effect on memory, Asian-American leadership, and the effects of preschool on children’s self-regulation. In addition, two PUC psychology alums presented papers at the convention for their graduate programs.

Juan Hidalgo, a senior with a double major in psychology and Spanish, co-presented Smiling Faces: Emoticons and Memory for Natural Language Messages. His group’s research was conducted as part of a psychology class on learning and memory. The group studied how people retain information when there is an emotional image, like an emoticon, attached. “It’s always exciting to be around the people who are studying the same things as you and have the same kind of lingo,” mentioned Hidalgo. “You get to kind of show off your school.”

The convention wasn’t just a series of presentations; students also had the opportunity to network with their peers, connect with potential graduate professors, and learn more about current topics in psychology research. During their time in Portland, the group also went out for a celebratory dinner. A generous benefactor in the Portland area paid for the meals of all the students, faculty, and the five alumni who joined them.