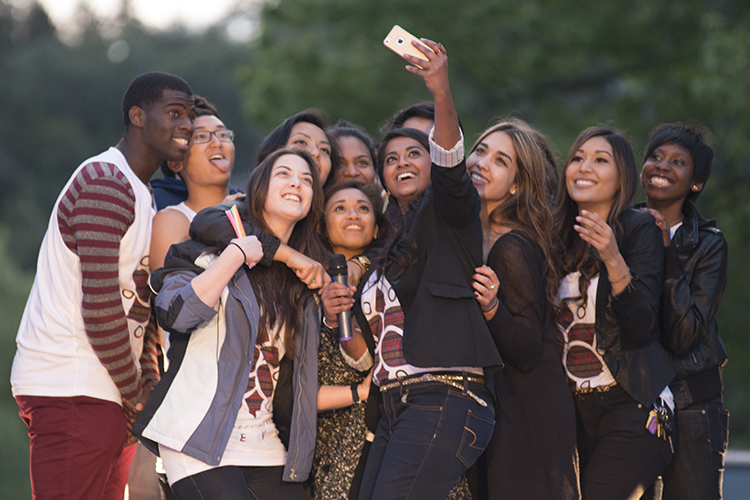 The highly anticipated and largest REVO event of the school year took place on Sunday, May 4, as the Pacific Union College community gathered for a concert, stuff sale, fashion show, and the yearly Spring Fest celebration. This year, REVO, a student-led philanthropic movement begun in 2008, benefitted an international cause with a remarkable local connection.

Last year’s successful REVO efforts benefitted Love146, an organization working to abolish child sex-trafficking and exploitation. This year’s cause, selected by the student organizers, was Project Worku. All proceeds from the year’s events, which included a special banquet and open mic night as well as the popular REVOfest, will go to the Worku Jenber School in Ethiopia, a school started by PUC’s head librarian, Adu Worku. The funds will directly benefit young people who yearn for an education by providing students at the Worku Jenber School with resources such as books and computers.

At the REVOfest, which this year was accompanied by the college’s annual Spring Fest fundraiser, various campus clubs set up booths outside on the Campus Mall to sell cultural foods, beverages, and more. Many of the clubs chose to donate their earnings to Project Worku. In addition, students donated gently used clothing and other items that were resold at the REVO stuff sale, further contributing to the cause. The day’s events also included a live benefit concert featuring a student band, and the ever-popular fashion show.

The Worku Jenber School in Ethiopia was a truly deserving beneficiary, according to REVOfest student leader Nithi Narasappa, who was humbled when she heard that most students had to walk close to three miles to school each day. “Project Worku is such a special cause, not only because Adu Worku built the school, but also because I want to see all those children experience success through education, just as I have,” said Narasappa.

REVO fashion show coordinator Stephanie Larson, agreed. “I really enjoyed serving for REVO because it gave me an opportunity to be a part of something that was bigger than the matters of my own life,” Larson said. “Working on the fashion show really gave me the opportunity to see how far people’s kindness will go and there’s no way we could have pulled it off without the whole team and volunteers.”

The fashion show was a highlight of the evening, with a runway suspended over the college’s fountain. Student designers and models displayed their creativity for an appreciative crowd of their peers. Melissa Khoury and Krista Bathan were awarded first place by the judges for their Lion King themed line, while Jaryn Hart, Meena Kim, and Manual Peralta were awarded the People’s Choice Award for their line featuring designs inspired by Pixar’s animated films.

While the event was full of fun, fashion, and good food, the reason for the celebration was never far from anyone’s mind. “I’ve been privileged with 18 years of education,” concluded Narasappa, “and am excited to see the empowered leaders that will emerge from the Worku Jenber School.”