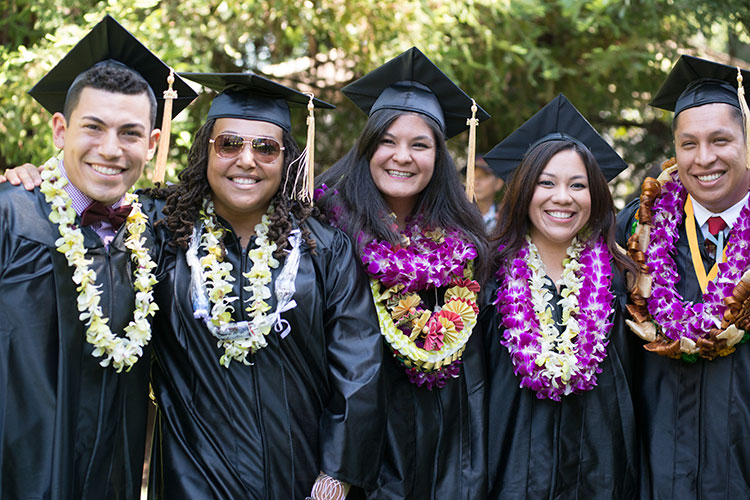 Beaming graduates and their families, exclamations of “Congratulations!” and the faint scent of airborne corn tortillas filled Commencement Grove at Pacific Union College, as the class of 2014 prepared to graduate on Sunday, June 15. The class is the largest in eight years to graduate from PUC, Napa Valley's only four-year college.

“I accomplished it with the support of family, friends and especially God,” said Shayla Huerta, who graduated with an associate’s degree in nursing. She is the first person in her family to graduate from college or enter the medical field, and plans to complete her bachelor’s degree in nursing next year. “It’s very satisfying to set an example for my siblings and cousins to pursue a education our parents never had,” Huerta adds.

Graduation weekend began with a consecration service Friday evening in the PUC Sanctuary. In her address, Tammy McGuire, professor of communication and one of the class of 2014’s sponsors, challenged graduates to consider a single-word question: “Satisfied?” The program also featured music, a presentation to parents, and a special blessing on the soon-to-be college graduates.

Nursing graduates and their family and friends reconvened in the sanctuary later that afternoon for the nursing recognition service. The president and CEO of Napa Valley Hospice and Adult Day Services, Linda J. Gibson, spoke in a ceremony that included the awarding of ceremonial nursing pins to new graduates. In the cool of the Dining Commons that evening, PUC President Dr. Heather Knight, faculty members, parents, and graduates gathered for a light reception that also showcased senior projects.

Early on Sunday morning—Father’s Day—family members and friends arrived to save the best seats for the weekend’s final event, commencement. The sounds of “Pomp and Circumstance” called graduates—many wearing colorful leis, honor cords, medallions, chains of artfully wrapped candy or all of the aforementioned—down the two center aisles to face the stage, as audience members proudly cheered.

Senior Class President Luke Thornburgh gave the valedictory following the presentation of the class gift, a high-quality permanent sound system for PUC’s Campus Center. Bradford Newton, executive secretary and ministerial director of the Pacific Union Conference of Seventh-day Adventists and chairperson of the PUC Board of Trustees, offered the commencement address: “Taking Your Own Best Advice.”

“What would you give back to the ‘you’ of today: your best advice from 2024?” Newton asked. Imagining that graduates could send back a message via Twitter from the future, he suggested two tweets of advice that the class of 2014 might send in twenty years: “Be brave enough to speak the three hardest words in the English language: I don’t know” and “Develop your serve,” noting that graduates should love others and serve them the same way that Jesus Christ did. The final message Newton wanted the class to hear was Christ’s message in Jeremiah 29:11: “I know the plans I have for you, declares the Lord.” Newton encouraged the students to rely on Christ’s guidance and help today and throughout their journey.

Following Newton’s address, PUC President Heather J. Knight conferred degrees upon graduates. Mark Ishikawa, director of alumni relations and engagement, officially welcomed the newest members of PUC’s alumni community, the class of 2014, before Ricardo Graham, president of the Pacific Union Conference of Seventh-day Adventists, gave the benediction. Shortly after the ceremony, while graduates and their loved ones gathered together, PUC’s familiar noon siren sounded—a rising and falling farewell from the campus.