By James Shim and Cambria Wheeler on November 20, 2013 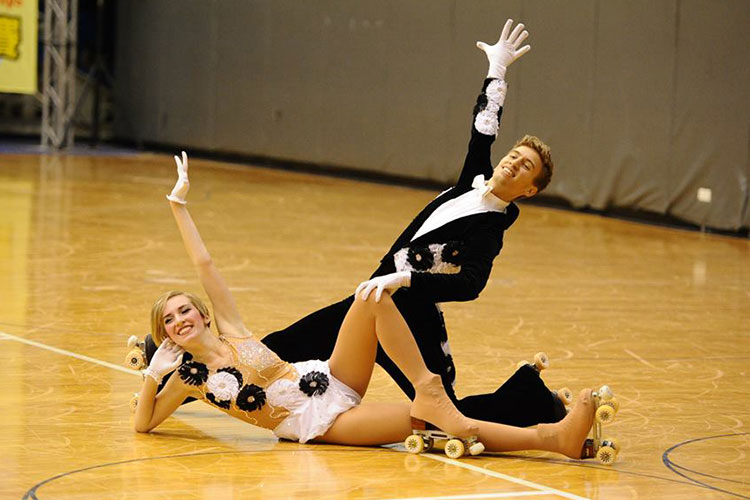 Since the age of 10, Pacific Union College freshmanSpencer Swetnam dreamed of competing in the world championships of his favoritesport. On November 2, his dream came true as he traveled to Taipei-City, Taiwan to compete in the 2013 Artistic Roller Skating WorldChampionships.

Swetnam and his partner Katelyn Rodgersrepresented the United States on the world stage in the team dance category. “Theworld championships are as high as the sport of artistic roller skating gets,”said Swetnam. “It is not in the Olympics for one main reason: Most people donot know about it.” Artistic roller skating is much like figure skating on ice,but with roller skates. The sport combines a careful balance of position,strength, and artistry in a single performance.

A 2013 graduate of Portland Adventist Academy, Swetnamspent much of his senior year traveling to Boston to meet with Rodgers as theyprepared for the National Championship held in Albuquerque, New Mexico fromJuly 21 to August 4, 2013. The pair competed in the Junior World Class TeamDance Division. This division requires three components: two compulsory danceswith specific dances and steps, an original dance with a routine danced to arequired genre of music, and the free dance which allows the skaters to danceto any song of their choice.

By placing first in the National Championships,Swetnam and his partner Rodgers qualified to compete in the Artistic RollerSkating World Championship.

Balancing rigorous training with the challenges ofbeginning college kept Swetnam and Rodgers from practicing together. “I was sonervous. Katelyn and I had a rough time practicing during the time we were incollege before we left for the championships,” Swetnam explained. “Beingfreshmen and new to college, traveling across the Unites States twice a monthwas not going to work, especially first quarter.” Since beginning college atPUC in September, Swetnam has practiced alone at Foothills Adventist ElementarySchool in nearby St. Helena, Calif. On November 2, Swetnam left PUC and flew toTaiwan.

Once he stepped on the floor in Taiwan and beganto skate, Swetnam said that he felt more relaxed than he though he would be. “Itold myself that I knew what I knew and I practiced what I practiced and thatall I could do was skate now.” Swetnam and Rodgers skated well. “We felt sogood after,” he shared. “It is almost like the separation from each otherhelped us.”

Whether it was the solo skates in the FoothillsElementary gymnasium or the five days of training the pair did together beforethe start of the competition, Swetnam and Rodgers finished the WorldChampionships by placing third. Swetnam could not be happier with the results. “The mostexciting moment while being in Taiwan was making the podium and getting thebronze medal, along with a big plush duck!” Swetnam exclaimed. Ducks conveypeace and happiness to the Taiwanese.

Swetnam has returned to PUC the proud bearer of abronze medal. Balancing school and skating is still very hard, but “I know whatmy priorities are and school comes first,” he explained. A pre-physical therapystudent, Swetnam hopes to work with children who need intensive physicaltherapy.