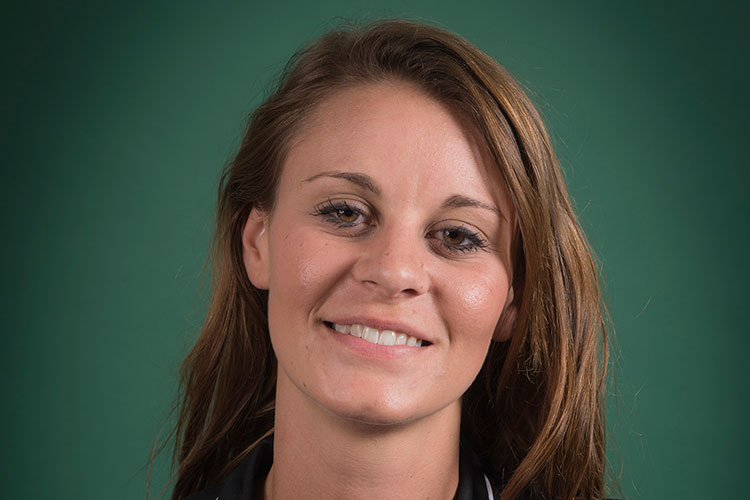 After finishing 3rd in league play in the California Pacific Conference, Pacific Union College’s Pioneers women’s volleyball team completed their season at the Cal Pac playoffs. The Pioneers fell to Menlo College on Friday, November 15. Menlo College would go on to defeat La Sierra and head to the National Tournament. After the playoff match, three lady Pioneers and their head coach Brittany Brown were honored with Cal Pac Conference Awards.

In a highly competitive conference, the lady Pioneers received the most conference honors in program history. Leading the Cal Pac with 584 digs, senior libero Lauren Secchitano was named to the California Pacific All Conference 1st Team and received the 2013 Conference Libero of the Year Award.

Setter Kailey Faust and outside Viridiana Gallardo were also named to the California Pacific Conference 2nd Team. Faust led the Pioneers with an impressive 884 assists and 112 digs. Gallardo led with 245 kills, and was second on the team in digs with 345 throughout the season.

“Lauren Secchitano, Viridiana Gallardo, and Kailey Faust have all worked hard this season, and with the help of their dedicated teammates have earned this honor,” stated Brown. “All of these athletes and this entire team have given PUC and our volleyball program much pride.”

In addition to the athletes’ awards, head coach Brown was named 2013 California Pacific Conference Coach of the Year. In her fourth season as head coach, Brown has nurtured PUC women’s volleyball from the bottom of the league to becoming a league championship contender. With the addition of 9 recruits this season, the Pioneers went from last place to 3rd place in the span of a year. Under Brown’s instruction, the young PUC team quadrupled last year’s win record with 17 wins.

“What an honor to receive this award after so much work from not only myself but the amazing girls I have been honored to work with this season,” said Brown. “I could not have gotten through this year without the support of my assistants Casey Miller, Alisa Jacobo, and Alejandra Gallardo. This award reflects the incredible support of my colleagues in the athletic department and the continued commitment from PUC’s president, Heather Knight.”

As this record-breaking season comes to a close, the 2013-14 lady Pioneers will say goodbye to Jenna Glantz and Lauren Secchitano, both of whom have laid a strong foundation for continued growth.