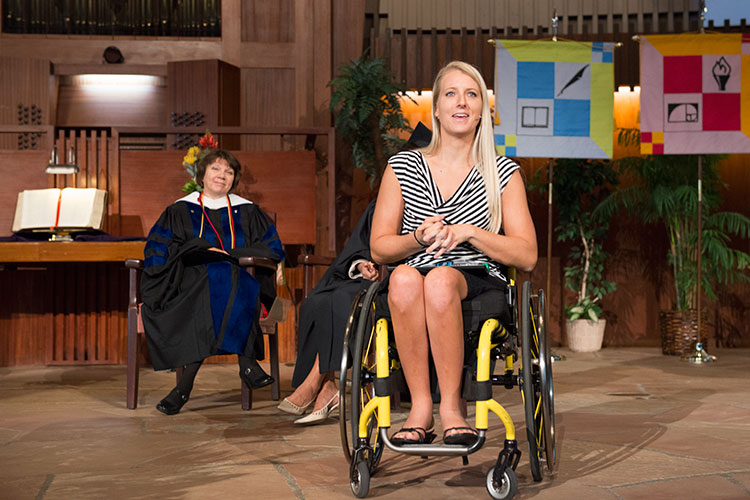 The Pacific Union College church was full to capacity for the college’s Convocation ceremony as PUC alumna and para-athlete Erica Davis encouraged the student body to set high goals for themselves and have determination and faith. Davis, who became paralyzed from the waist down soon after graduation, is an accomplished para-athlete and the first paraplegic woman to summit Mt. Kilimanjaro, Africa’s highest peak. She now works with the Challenged Athletes Foundation, encouraging other athletes with disabilities to reach for their full potential.

“There is always a way to figure it out and do something,” Davis said, referring to her determination as she tries new sports from rock climbing to open water jet skiing. “That’s why I don’t like the word can’t.”

After sharing her lifelong passion with sports with the gathered faculty, staff, and students, Davis told the audience about the only race she has ever quit: a cross country running race she participated in as a PUC student, a decision she regrets to this day. She then recounted her recent experience at the Paratriathalon World Championships in rainy London; though the slick roads made moving her handcycle challenging and caused other racers to give up, Davis finished in the top six internationally in her division.

Davis graduated from PUC in 2004 with her teaching credential and bachelor’s degree in exercise science. She was living an incredibly active life when an unexpected spinal hemorrhage caused her to lose the use of her legs. Spending 46 days in the hospital in 2006, Davis tried to hide her fears from her family. “However positive I tried to be during the day, I was scared,” she related. “What’s going to happen to my life? Sports were such a big part of who I was, and now I couldn’t even move my big toe.”

What got her through those dark nights was faith. Though she wanted the “delivering faith” that would immediately turn her situation around, it was a sustaining faith that told her the best was still to come. “I believe that God is in control and knows what He’s doing in my life,” Davis explained.

After recounting her many successes in the past seven years as a para-athlete, from summiting Mt. Kilimanjaro to setting records and beating male para-athletes in various types of races, Davis encouraged the student body to set high goals and believe in themselves.

“I was sitting where you are sitting nine years ago. And I can tell you that God is putting the pieces together and working behind the scenes because He has plans for us,” Davis said. “Trust God, have faith, and know that He is your biggest fan.”

The message was a motivating start to the year for the campus community. “I thought it was really inspiring because there are people with full ability who don’t think they can do what Erica does, but she does it despite the extra challenges,” shared Yolanda Noriega, a freshman who graduated from Lodi Adventist Academy, the same high school Davis attended.

The Convocation exercises ended with the ringing of the historic Healdsburg Bell as the campus officially began the new school year. Convocation is the opening Colloquy program of the year, and begins and ends with the college faculty marching in and out of the PUC Church in their full academic regalia, creating a colorful display of their graduate institutions and academic disciplines.