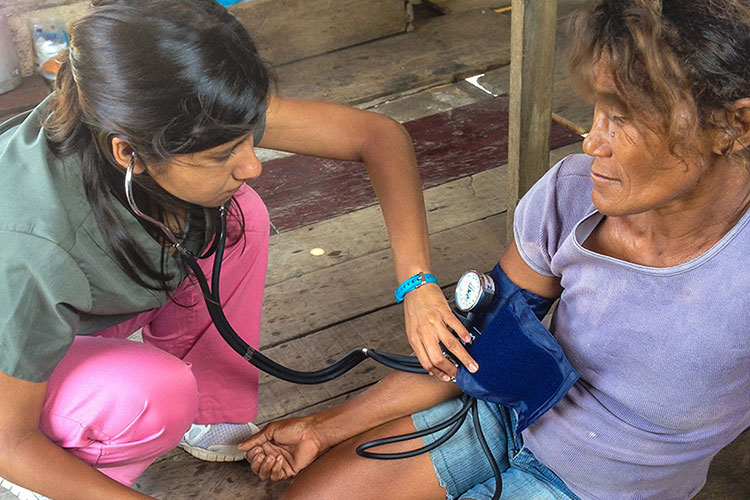 Thirty Pacific Union College students will be dedicating their time and talents to God by serving as student missionaries during the 2013-2014 school year. From medical clinics in the Amazon to classrooms in South Korea, these students are answering the call to serve God by serving others. The thirty young men and women are an exciting increase from the eight students who served during the 2012-2013 year. The renewed commitment to service demonstrates an exciting revival of long-term mission service as they join the 1,300 student missionaries that have served from PUC during the college’s history.

Robert Henry, a theology major from Riverside, Calif., started his service as a teacher at Indonesian Adventist University on August 1, 2013. “The main reason why I decided to become a student missionary is because I saw the need,” Henry shares. “Last fall Pastor Jose Rojas came to PUC for a midweek vespers speaking on the topic of missions. That night I made the commitment to serve for a year overseas; with God's leading and the assistance of the PUC missions office it has become a reality.”

The office of service, justice, and missions is excited that Henry and his classmates have answered the call to serve. Bringing popular speaker Jose Rojas to campus last October was part of an intentional effort to recruit and support future student missionaries. Chaplain Laffit Cortes and Service, Justice, and Missions Coordinator Fabio Maia set an ambitious goal to infuse the campus with a culture of service and opportunities to give back.

Ben Speegle, last year’s student director of the world missions program, joined Cortes and Maia as a new full-time employee tasked with helping with the logistics of both short-term and long-term mission projects. Speegle served as an SM in Thailand before graduating from PUC in June. He observes a changing culture at PUC where “people don’t just want to go four years here and graduate. We have people who want to make the most of their experience here and make the most of their lives as Christians by going out and affecting the world that they live in.”

The students of Vejlefjordskolen, an Adventist boarding school in Denmark, met their new dean Kylee Brock in early August. Brock chose to give her time after graduating with her bachelors of arts in film and television. Though heading to Denmark meant leaving her fiancé, family, and film career behind for a year, the Visalia, Calif. native is excited about the opportunity for service. “One day, I just felt God was telling me to check out the opportunity, and I seized it knowing I could be going to a place like Denmark!” she explains. “I truly felt like God was pushing me in this direction, and He made it happen!”

Other PUC student missionaries are working in places as diverse as Mongolia, Argentina, Khazakhstan, Cambodia, China, and Pohnpei. Speegle notes that the world missions program works hard to connect students with opportunities that match their skills and career goals so they can be of most service. This means serving through the North American Division of Seventh-day Adventists as well as with various supporting ministries around the world. For instance, a group of allied health majors traveled to Pohnpei over the summer to work in health clinics run by the non-profit group MAHI International.

Bryan Soderblohm, a student from Yucaipa, Calif., resumed his studies at PUC in September after spending the past year in Guyana. The aviation and religion double major worked as a teacher and mission pilot with Adventist World Aviation’s Wings for Humanity. “On a basic level, I learned how to cook pretty well,” Soderblohm relates. “Seeing some of the things I saw—death, sickness, poverty—really opened my eyes. If anything, my year abroad gave me new eyes. A mission trip really isn't about going and changing the world. It's really more about changing yourself.”

Speegle is excited to support the student missionaries through care packages, notes, and phone calls from the PUC family. In addition, “each student missionary can know they have 1,600 people praying for them in Angwin,” he relates. In October, Jose Rojas is returning to PUC for the week-long Fall Revival to speak again about the importance of integrating service into a Christian walk. PUC’s missions program will be working hard to support those who answer the call to serve, with the goal of increasing the number of student missionaries to forty next year.