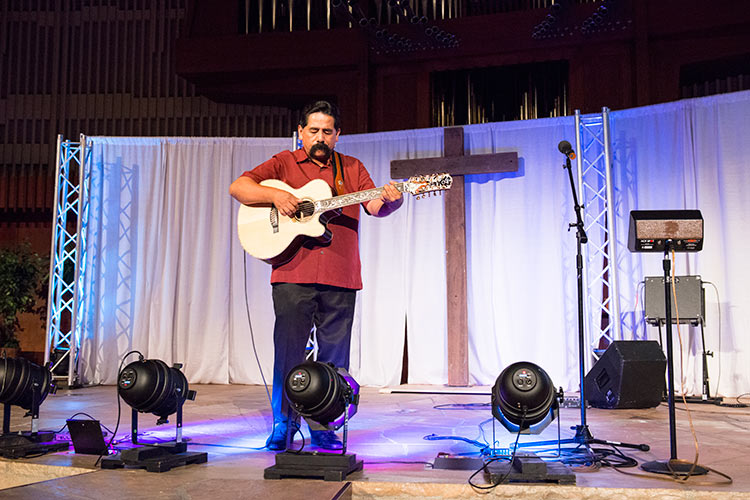 During the week of October 6, PUC welcomed Pastor Jose Rojas to campus as the speaker for Fall Revival, an annual week of spiritual emphasis. Pastor Rojas, a PUC alum and acclaimed speaker, inspired and electrified the student body for a solid week, leaving many individuals with the new resolution to devote more of their time to ministry and missions.

Rojas delivered weeknight sermons before concluding with a special vespers on Friday night and two church services the following morning. The well-attended weeknight meetings followed the theme of “Believing God,” while the special vespers and church services were focused on the missionary aspect of one’s Christian journey. The special Friday night vespers was streamed live to 532 viewers around the globe.

Rojas communicated how belief in God is one of the most important steps on one’s spiritual journey. He shared how this belief can be the catalyst to success in faith, school, health, and relationships. Using inspirational stories and emphatic examples, Pastor Rojas punched one point repeatedly: “First, you must believe!” Rojas also makes a habit of singing at the end of each of his sermons, concluding his message with a unique touch.

Rojas emphasized the deep importance of missionary service, particularly during the college years. During his previous visit to PUC in October of 2012, Rojas covered this same message, encouraging PUC students to dedicate multiple weeks, if not an entire year, to missionary service. The results speak for themselves: multiple groups of students provided help and service to locations as remote as Nicaragua and Brazil over academic breaks, and nearly 40 student missionaries are giving more significant time in service during the 2013-2014 year. At the conclusion of Fall Revival, a total of 105 PUC students had already signed up to be student missionaries and 200 students signed up for campus ministries.

Rojas’ speeches weren’t limited to just the sanctuary; he also visited the residence halls and lectured to the Ministry Colloquium, a weekly class attended by theology majors and the faculty of the department of religion. “I didn’t want him to speak just for the Revival, but to mobilize people,” explained PUC Chaplain Laffit Cortes.

During the week of revival, 25 students answered Rojas’ call for baptism; one sophomore, Zach Tierce, was baptized during church on Sabbath, October 12. “It was awesome to see the commitment the students were making, whether through baptism, student missions, or just giving their life up into God’s hands,” said Kristen Beall, one of PUC’s student chaplains.