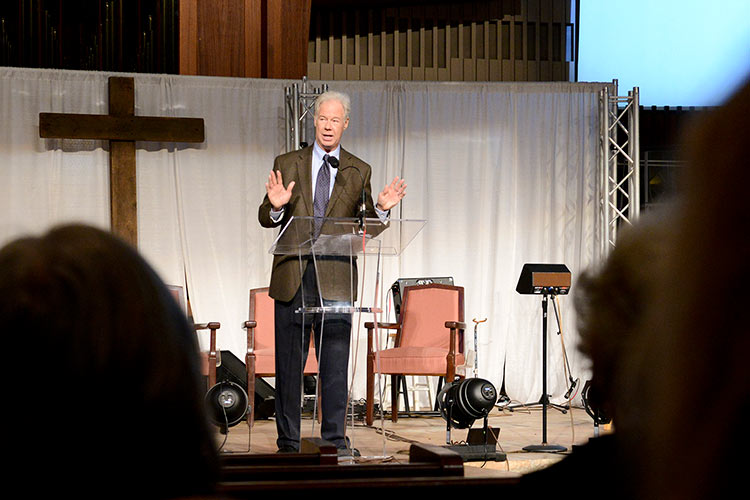 Emmy Award-winning filmmaker Martin Doblmeier, creator of over 25 films and owner of Journey Films, visited Pacific Union College on October 10 to address students at the Adventist Heritage installment of the Colloquy Speaker Series.

Introduced by President Heather J. Knight as a “non-Adventist who is interested in how faith builds extraordinary beliefs and communities,” Doblmeier first visited PUC in 2012 to present his film The ADVENTISTS, a documentary that focuses on Adventists’ work in healthcare. Though he did not intend to pursue further projects about Adventists, his next film The ADVENTISTS 2, looks at Adventism’s international healthcare ministry. “The documentary explores the idea of how Adventism is a story of how people go to the far corners and take medical missions over the world,” Doblmeier told the students, staff, and faculty gathered in the PUC Church.

After showing a short clip of the film, Doblmeier told students about his approach to religion, faith, and spirituality. He began by saying, “I find myself looking for God through the people of this world… this is my mission.”

Doblmeier continued by describing how Christians can tend to force others into religion through “religious arrogance.” He explained that we should rather have our faith exemplified in a way that will draw others to us. “That is how you grow in your faith,” he added, noting that the greatest sign of spiritual growth is “sharing faith without arrogance.”

Recognizing PUC’s many healthcare-oriented majors, Doblmeier encouraged students to engage in medical missions. “The greatest sign of our human character is to travel to other lands, other cultures, other religions, and to touch them, interact with them, and, if you can, heal them,” he stated.

Doblmeier then shared a preview of his upcoming film The Blueprint. The film, which is in the final stages of production, profiles the Adventist private school system. The Adventist education system is one of the largest in the world, one noted for excellence in numerous research studies. Himself a product of Christian education from elementary school through college, Doblmeier described classrooms at Christian schools as sacred spaces. “Inviting God in to that space is genuine faith-based education,” Doblmeier concluded.