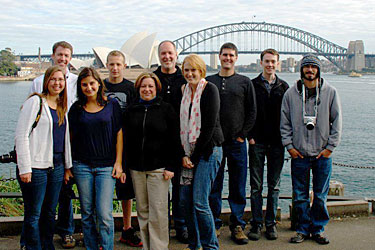 Most students would jump at the chance to travel to Australia and New Zealand and call it academic credit. PUC students had just that opportunity when the department of history offered its biannual summer study tour June 25 to July 7. The group spent four days in New Zealand and seven touring Australia, and logged over two days of travel on eight separate flights.

“It’s sort of like one long field trip—you can go to museums and historical sites—but at the same time we had readings to do and we would connect them to what we saw and we would write journal articles about them,” says Max Morphis, a sophomore history major. “We had readings that covered all kinds of topics... It was definitely a class but it was more than just a class.”

“The various museums we went to are not something that you’re going to find here [in the United States],” notes Paul McGraw, chair of the department of history. “History is something that takes a different perspective when you actually experience the stuff rather than just reading about it.”

Students on this year’s tour also had the option to take two additional upper division courses: a seminar in the history of Australia or a course on Christianity in the South Pacific, in addition to the standard study tour class.

In addition to their academic activities, the group took time to enjoy their travel. “New Zealand is beautiful, it’s just gorgeous,” enthused McGraw, recounting the group’s visits to numerous museums in the country and interactions with the Māori, New Zealand’s indigenous people group. In Australia, the group split their time between Cairns, near the Great Barrier Reef in northern Australia, and Sydney on the east coast.  While in Sydney, they visited Avondale College, Australia’s Adventist institution.