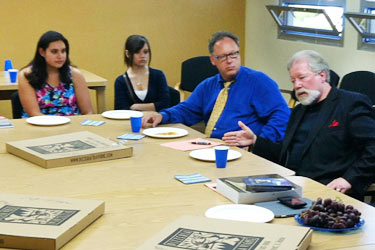 “When you get the opportunity to ask questions of attorneys who are active, it’s just a great opportunity,” said Cynthia Westerbeck, professor of English and department chair. “When you ask, ‘What do I do to prepare for law school?’ and you get a law professor giving you the answer, that’s great.”

Reinach is the executive director of the Church-State Council, the religious liberty ministry of the Pacific Union Conference of Seventh-day Adventists, while Bruce Cameron serves as the Reed Larson Professor of Labor Law at Regent University School of Law.

The two discussed the importance of integrity in the field of law, the state of the law market, religion in the field and law school application tips. They also took questions from students, sometimes giving varying answers to student questions. “The two did not always agree on their answers,” notes Westerbeck. “It was really great to see different perspectives.”

“I enjoyed being able to listen to both lawyers talk about their philosophies and provide pointers for law school admissions,” said Giovanni Hashimoto, a sophomore journalism and American history double major with a pre-law focus who is active in the Pre-Law Society. “Both Alan Reinach and Bruce Cameron are clearly brilliant lawyers who have been involved in setting new precedent in their fields; it was great to have them even if you don’t necessarily agree with their ideologies.”

While PUC doesn’t currently have an official pre-law program, students interest in the field are advised by faculty in the departments of business, communication, English, or history. The emphasis has been seeing major growth recently; prior to the 2011-2012 school year, students on the pre-law track were directed only to the business department for academic advising.

To cater to this growing group of students, the society plans to hold at least one pre-law forum per quarter, similar to this event and Justin Kim’s appearance at PUC last year. Meanwhile, several professors have been developing classes to serve pre-law students in their departments. The department of history also began offering a degree last year for students interested in political studies, a popular field with pre-law track students.