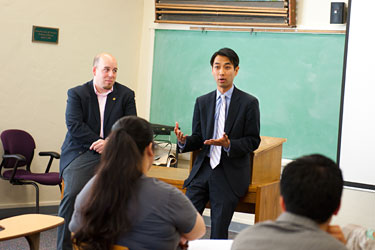 One week after Pacific Union College’s annual Homecoming event, Justin Kim, class of 2001, made it back to Angwin for an unofficial homecoming of sorts. While there was not a Diogenes Lantern flower or class party in sight, it was still a weekend of much activity and reunion.

Kim’s April 27 visit came at the invitation of multiple groups on campus, both academic departments and student groups. Kim is currently running for Congress as a Democrat in California’s 31st District, which includes the Southern California cities of Loma Linda and Redlands.

Kim started his morning as a guest lecturer in an American government class, where he shared his experience of working in all three branches of government. Kim, who graduated from Yale Law School in 2004, worked as a law clerk for a federal district judge in Riverside, Calif. He also worked for the Department of Justice litigating civil tax cases in California and other western states. Most recently he has served as a legal counsel for Democratic legislators in both the Senate and the House of Representatives.

Following the class, more than 60 people attended a meet-and-greet luncheon with the candidate, sponsored by the newly formed student club, College Democrats. Later in the afternoon, Kim joined Julius Nam, a former professor in the PUC religion department and a current student at the UCLA School of Law, for a Pre-Law Forum sponsored jointly by the departments of history, English, business, and communication.

“It was interesting to hear about law school and the admissions process from those who have already done it,” said Giovanni Hashimoto, freshman pre-law, communication major. “I think they gave out many valuable pointers, which I plan to use.”

On Sabbath, Nam interviewed Kim on the topic of “Personal Faith in Political Spheres” at one of the PUC Church Sabbath School classes. Kim, a lifelong Seventh-day Adventist, spoke specifically bout his commitment to not campaign on the Sabbath.

The seed for Kim’s campaign was planted last year, when a redistricting commission redrew several Congressional districts in Southern California. The result was the newly created 31st, an area that encompasses the towns where Kim was born and raised. The new district is populated with a large community of Adventists and skews slightly Democratic, factors that seem to bode well for Kim.

Even so, the choice to run was a difficult one. “It took me five or six months to make this decision, and I prayed about it a lot,” said Kim in an earlier interview with PUC. “I decided that certain things had to happen in a certain order for this to happen.” Ultimately, he felt that God and the unique opportunity were leading him to get into the race.

According to Kim, the distinctive viewpoint that he developed as a student at Adventist schools (Kim attended Loma Linda Academy and PUC) also helped shape his decision to run. “We’re raised to believe in service to others, and I think this is a form of that concept,” he said. “I’m running because I want to try to serve my community.”