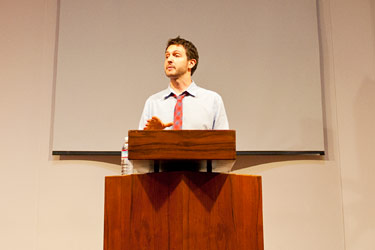 An award-winning documentary filmmaker and TV journalist gave a presentation on his work and career at Pacific Union College’s Communication Honor Society Symposium, May 4. Christof Putzel, a correspondent for Current TV’s Vanguard documentary series, spoke about his motivations and experiences as a young filmmaker to over 100 attendees at his afternoon presentation in PUC’s Scales Chapel.

Recounting the start of his career as a documentary filmmaker, Putzel spoke about how the summer before his senior year, he took advantage of a school program that gave students $3,000 to spend exploring career interests. He spent half the money on a camcorder and the other half on a plane ticket to Kenya. ​​The end result was Left Behind, a documentary about Kenyan AIDS orphans, which he completed while still an undergraduate in college.

"I had no idea what I was doing," he said, recalling that he did not even know how to operate the camcorder before leaving on the trip. "I just knew I wanted to go do something."

Putzel spoke about how he arrived in Nairobi, Kenya, and began filming without any training except what he got through a chance meeting with a National Geographic employee who sat next to him on his flight. After filming, he spent over a year editing the footage to create what became an award-winning account of the plight faced by AIDS orphans in Nairobi.

​Although the film was a success, Putzel remembers being left "completely spiritually broken" and unsure what to do next. "I couldn't see how I could possibly do anything like this [creating the film] again," he says. He could not stop thinking about the people who had been in his film who had helped him get where he was in his career; he wondered what he had actually done to combat the spread of AIDS.

His emotional turmoil led him to a silent Zen Buddhist monastery in upstate New York, where he lived for ten days. "It was completely agonizing... just being alone with your thoughts is the most horrendous thing," he said, recalling how he struggled with his faith in light of injustices around the world.

He said he sought to understand how there could be a divine power who permitted injustices—citing examples of real evil, such as women being raped in large numbers, child soldiers armed to kill, and migrants dying of exposure in the desert. He wondered, "How could a God allow any of this to happen?"

Putzel said he continued to broadcast stories, while grappling with his own questions. People of all kinds of faith have given him one answer he finds particularly meaningful: "There's a God, and you know that there's a God because He made you to come do this."

That notion, he explains, has had a huge impact over the years as he finds purpose in his reporting. "I try to tell every story that I have with mission, honesty, but most of all, passion," Putzel stated. "I've had adventures which I wouldn't trade for anything."

Putzel encouraged students to pursue their passion, whether it be journalism or something entirely different. "I would encourage you—anyone in this room—to find something that you know is going to give you some sort of purpose."

As students start out in their careers, he urged them to take great personal risks in pursuing their passion. Continuing, he asserted that world travel was the best education he ever had. "It will make you smarter, it will make you more conversational," he added. "You will have a perspective which you never would have had otherwise."

"Everything is incredibly complex and you never get to learn or see the complexity of that until you step out."