Wintley Phipps to PUC Students: "Glimpse God’s Destiny for You" 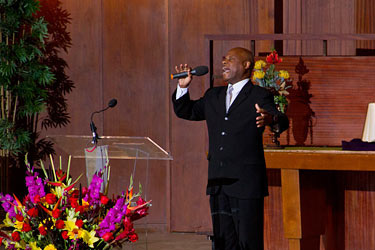 At Thursday morning’s Convocation ceremony, education advocate and vocal recording artist Wintley Phipps called PUC students to live out God’s rich destiny for each of their lives. Phipps is an Adventist minister, a Grammy-nominated gospel singer, and the founder and president of the U.S. Dream Academy, a foundation that promotes educational opportunities for children of convicts.

“God is the ultimate dreamer—when He dreams planets are born…stars twinkle in the skies,” Phipps said. “But when He dreams, He also dreams about you and your destiny, and the most incredible thing you can experience is to get a glimpse of the destiny He has dreamed for you.”

After opening the program with two songs in his rumbling baritone voice, Phipps shared his life story, emphasizing what he called “moments of destiny.” From stories of his humble childhood in Trinidad, he went on to show clips of his first appearances on the television programs Soul Train and Saturday Night Live—where he performed spiritual songs far different from both shows’ usual fare. “God showed me that you don’t have to compromise to be recognized,” he said.

Other “moments of destiny” Phipps described included singing for civil rights icon Rosa Parks, involvement with special events with Oprah Winfrey, and performances in front of every U.S. president since Jimmy Carter.

One story in particular held special meaning for Phipps as he outlined what he believed was God’s destiny for his life. After several positive encounters with President Bill Clinton, Phipps heard the news of the president’s extramarital affairs and felt impressed by God to write Clinton a personal letter. In the message, Phipps referred the president to Psalms 69, in which David prays for mercy in the face of persecution and begs God’s forgiveness of past sins. Phipps said that not long afterward, a member of Clinton’s administration told Phipps that the president had taken the letter to heart, and that it had prompted him to make his impassioned confession to the nation.

“It has been my privilege to live the destiny God has planned for me,” Phipps said.

At the end of his presentation, the speaker challenged the audience to seek out and live God’s destiny in the coming year. The front of the church flooded with students, faculty, and staff answering his call as he sang out his deep and powerful rendition of “Amazing Grace” over the gathered crowd.

Convocation is the opening Colloquy service and ceremonial beginning of the school year. At the beginning and end of the service, PUC’s faculty and select staff marched into and out of the church in full academic regalia, sashes and colors signifying each of their disciplines. The church was packed to capacity.