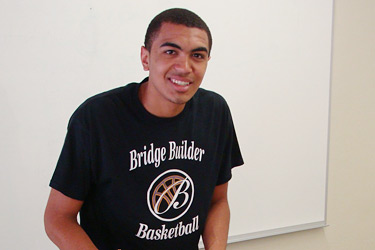 Pioneers men’s basketball coach Kirt Brower is pleased to announce the signing of two new players to the team’s 2012-2013 roster.

Vincent is pursuing a degree in biology, pre-med, and plans to become a cardiologist. He says the decision to come to PUC was influenced by a lot of prayer, and that the opportunity on the basketball team helped make the choice easier. “The team as a whole has a good attitude and love for the game, which to me is very important,” he says. “I've talked personally with a few of the guys on the team, and after last year’s season they are really looking forward to working hard and improving to ensure that this year’s team is a legitimate contender in the Cal-Pac. I personally am ready for the challenge, and I am going to work hard this summer to improve my game even more so that I can be a key asset to the program.”

Trevor Noguiera is a 6’ 0” guard graduating from Sierra High School in Manteca, Calif. He was a two-time All-League First Team Valley Oak League selection, averaging 12.9 points and 3.6 assists per game in his senior season. He also earned Team MVP honors during his sophomore and senior seasons. Noguiera is an exercise science major working toward a teaching emphasis.

With these new additions to the roster, Brower is looking forward to the start of the season. “We are very excited about the upcoming season and I’m proud of the way our players have worked this spring,” he says. “With the way our returners are working in combination with some new players coming in, we are looking forward to being much more competitive in the Cal-Pac.”`