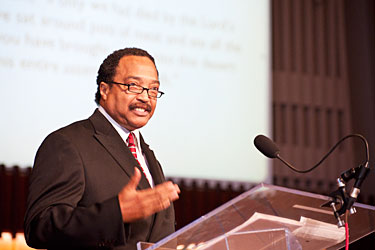 Pacific Union College held its annual Martin Luther King Jr. Remembrance Colloquy on January 12, 2012, celebrating the legacy of this civil rights leader ahead of Monday’s federal holiday in his memory. The program featured a presentation by Norman Knight, PUC’s outreach chaplain, entitled Beyond the Red Sea and highlighted the college’s diversity and its commitment to continued progress in the area.

Knight focused on the message King would have had for young people on college campuses across the country were he still living today. Knight opened his address by reading the account in Exodus 16:1-3 where the Children of Israel were grumbling to their leaders. Knight used this as a springboard to weave a puissant narrative paralleling the civil rights movement with the struggles of oppressed people everywhere and the responsibilities that come with arrival in the “promised land” or an end to oppression.

Knight discussed the movements of people standing up for their civil rights as springing from an innate human force which refuses to be suppressed. “It is always true that when you have one force dedicated to denying people their freedom and dignity, you will always have another force committed to ensuring liberty and liberation. The human spirit seems to have an inner force that over time refuses to be held captive to slavery, servitude or denial of basic civil rights no matter what the consequences,” he said. This spirit “is one of the most unconquerable forces on earth” and is evidenced in the Arab Spring movement seen throughout the Middle East, he said.

According to Knight, once a group finds itself in the “promised land” and throws off its oppressors it finds a new enemy. “There is a shift in our attention from the old enemy to the new enemy. And the new enemy is us. Ourselves.” After “crossing the red sea” we must come to grip with the responsibilities of freedom because we are now responsible for the destiny of our own lives. “We can’t take potshots at that other race for everything anymore. Our failures are ours now. Our faults and shortcomings are ours now. We can’t protest against Bull Connor anymore. We can’t blame our parents, our siblings now, we are on our own now.”

Sophomore biology/pre-med major Meena Kim said she appreciated Knight’s focus on responsibility. “I thought his view that humans have an intrinsic need for freedom was really inspirational,” she said. “But the fact that freedom comes with responsibility for our own destiny is a really important reminder, particularly for us as college students.”

Before the address, PUC President Heather Knight made special remarks highlighting King’s “struggle for equality in the face of entrenched hatred, bitterness and oppression,” and praised his “deep love for all people, nonviolence, discipline, ethos and courage in faith” as that of an exemplary Christian leader. Noting that King’s vision of a “beloved community” aligned with PUC’s tradition of diversity, she observed that PUC is “richly living out King’s vision” as the most ethnically diverse liberal arts college in the Continental United States according to the US News and World Report.