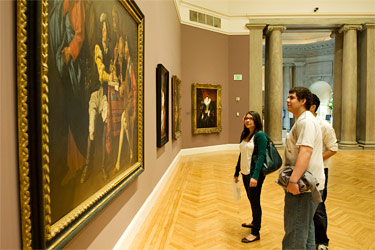 “We’re all really excited about the program,” says Milbert Mariano, chair of the department of visual arts. “It’s a more professional degree that prepares students to either go on to graduate school or be a professional in those areas due to the intensity of the program.”

The BFA curriculum will be more focused on core visual arts classes than those of the BA and BS programs offered by the department. To facilitate the larger focus on departmental classes, students in the program will have a reduced general education requirement.

BFA-track students will focus about 20 percent of their classes on art history or art criticism to gain a greater depth of knowledge of the visual arts. In addition, students in the program will have their own studio spaces during their third and fourth year to work independently while developing their senior thesis projects and portfolios.

The new degree has already attracted interest from many students. “There has been huge interest in the program,” says Mariano. “A lot of students want to apply, and I would say more than half of the freshmen, sophomores, and juniors in the department want to transfer over to the new BFA.”

The other new program at PUC, the degree in biomathematics, is an attractive option for students interested in combining the study of biology and mathematics in preparation for graduate programs in those fields.

“By introducing this new bachelor of science in biomathematics, we are looking to help students interested in pursuing a mathematics degree who also want to pursue pre-professional programs requiring work in biology,” said Lloyd Best, math department chair and advisor for students in the new program.

Best notes that the new major is also valuable to students interested in pursuing graduate study in public health emphasizing biostatistics, mathematical biology, biometrics and other research-intensive programs, as well as biomathematics. PUC is one of only two colleges or universities affiliated with the Seventh-day Adventist Church to offer a major in biomathematics.

Students studying biomathematics will master mathematical problem-solving methods and understand the concepts and constructs of general chemistry and biology, allowing them to apply mathematical methods to model various biological phenomena. They will also learn to function effectively in a mathematical modeling team and communicate modeling methods and results in both written and oral form while mastering technologies used in mathematics.

Four students have already enrolled in the program. “I heard about the biomathematics program here... it seemed like a good combination of both my majors put together,” explains Tessa Lamberton, a transfer biomathematics student who was pursuing a biology and mathematics double major at her previous school. “This major gives me an opportunity to still do a degree in four years and have that option for grad school, whether in biomath or biology or medical school. It opens more doors for me."