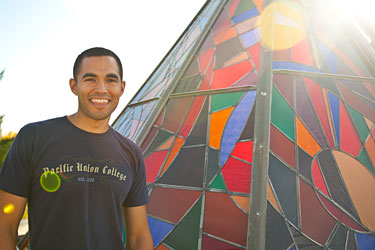 In spring 2011, the Pacific Union College Church pastoral staff decided that it was time to do something about the stained glass window in the roof of Scales Chapel. The original stained glass was installed in the 1970s, in what was then called the Youth Chapel. Years later, the joints had begun to weaken and leak. The situation became so bad that a board had to be placed under the window to protect people from falling glass.

John Hughson, PUC Church administrative pastor, contacted Robert Pappas, ’76, to take a look at the ceiling. Pappas taught in the art department at PUC from 1977-1981 and has been an art glass professional for 30 years. He also did repair work on the stained glass windows in the church three years ago.

After looking at the glass, Pappas knew it needed to be replaced. “I thought that an art student could donate their time and then have a significant commission to have in their portfolio,” Pappas says. He recommended Cabel Bumanglag, who graduated with a fine arts degree from PUC in 2010 and had studied stained glass. Bumanglag agreed to volunteer his time.

To launch the renovation, Bumanglag and Pappas set to work devising a plan. Bumanglag came up with three different designs and color schemes, meeting with the church numerous times to narrow it down. Bumanglag noted that the stained glass windows in the chapel were of two varieties: one with a rough edge and the other with a geometric design. “I was trying to bring the two together and mix something of my own with it,” he says. The outcome was an abstract sunburst design and a color scheme that coordinates with the other stained glass windows in the chapel.

The project took Bumanglag and Pappas about three months to complete. To honor his commitment, Bumanglag stayed with the project to the end and did not take a summer job. The project was completed September 30, 2011.

The skylight now houses a total of 16 windows, made up of eight sections of glass, with two panels in each section. The new sections of stained glass are only about 1/8 inch thick and weigh about 60 pounds—approximately one-third what the old glass weighed. Bumanglag and Pappas also installed rebar reinforcement to ensure that the skylight will be stable into the future.

About 10 colors of stained glass are included, from sources including Germany, Washington, and Iowa. Spotlights situated inside, near the bottom of each panel and turned on each night at sunset, create a beacon that can be seen from the cafeteria, the library, and a number of other locations on campus.

Tim Mitchell, head pastor of the PUC Church, says of the skylight: “It will enable beautiful colored light to create a quiet ambience in Scales Chapel, just as the building was originally designed to have.”

There will be a dedication ceremony for the skylight on November 5 at 4:30 p.m. in Scales Chapel. The public is welcome and the event is free.