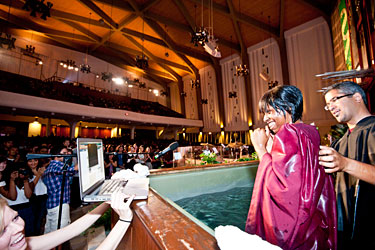 “Because of your love for Jesus, I now baptize you in the name of the Father, and of the Son, and the Holy Spirit.” On October 14, four students heard these words before being immersed in water in front of hundreds of their peers at the “As I Am” vespers, the culmination of PUC’s October 12-14 Fall Revival.

The week of spiritual revival, which was themed “Grounded in Christ,” is a quarterly event, but this time, there was an unmistakable sense of God’s presence on campus. “It’s something strong and deep,” said Andrew Lloren, a junior. “By just being here, you know that God is doing something big.”

Laffit Cortes, PUC’s new campus chaplain and the series speaker, made five compelling challenges to students to honestly evaluate their faith and make a decision about where they stand spiritually.

“I saw that there’s definitely a struggle – the Great Controversy is being played out here,” said Cortes. “But there’s definitely a hunger and thirst for God.” This spiritual desire was evident in the ever-increasing number of students that attended the revival programs throughout the week.

The first program, held on Wednesday night, was a challenge to students to reach out their hands to Jesus for spiritual healing, so that they could walk with Him. “It was a much-needed wake-up call,” said Angela Anjejo, a second-quarter nursing student. “It showed me that there’s a difference between talking about my faith and living it.”

On Thursday, Cortes taught students how to pray, and students called out praises, thanks, confessions, and requests. Yet Cortes went beyond the usual invitation to prayer, demanding respect for the exercise of talking to God. “We’re going to pray right now,” said Cortes. “And some of you are on laptops or reading books. Close them, or walk out the door – but don’t dis[respect] my God.”

Cortes continued his intense appeals for students to surrender to God on Friday morning. “Lots of you say you’re Christians,” said Cortes, “but really, you’re just a fan of Christianity. If you want to follow God, you need to be a bondservant of Christ.” Cortes emphasized both the rewards and difficulties of a life lived with Jesus. When he called for those who were willing to “bear your cross” for God, hundreds of students stood.

Four students – Ashley Adams and Markus Baumbach, both freshmen, Gina Lee, a sophomore, and Sianna Stewart, a junior – responded to Cortes’ call. “After always striving to commit to God, there was no way I would back out when the opportunity seemed so in reach,” said Stewart. Baumbach said, “I wanted to do it because [I realized] it was my decision, no one else’s.” Regardless of their reason, all four students decided that they wanted to be baptized that evening at vespers.

“I believe God wanted this to happen here,” said Stewart. In front of her assembled friends and family, who connected from New York via Skype, she was baptized. “The experience was amazing!” she said. “It feels great to be officially connected to God and to never have to doubt that I am His and always will be.”

Stewart’s statement summed up the message of the “As I Am” vespers, the final program of Fall Revival. On stage, large cards read, “I had sex before marriage,” “I cut myself,” and “I lust,” just three of over 250 cards that students submitted in response to the question, “What keeps you from God?”

More than twenty other cards were displayed in a powerful movie created by Lloren, in which students held up cards expressing everything from, “My boyfriend and I go too far” to “I’m a hypocrite.” The message was simple – regardless of what PUC students struggle with, they can come to God and be accepted as they are.

“We wanted to show the school that no one is struggling alone,” said Wally Peralta, student association religious vice president and Fall Revival coordinator. “We are a community trying to get closer to God.”

Many students experienced and treasured the Fall Revival time. Taryn Richert, a senior, said, “It was so powerful and moving – I never wanted it to end.” Yet though many students look back on the week with warm memories, Cortes is looking to the future. “God’s spirit was with us this week,” he said. “Now the challenge is the follow-up.”

That follow-up will be directed by Cortes, Peralta, PUC church pastors, and student leaders though prayer groups, ministries, and Bible studies. But one thing is undeniable: the Spirit of God is present at PUC.