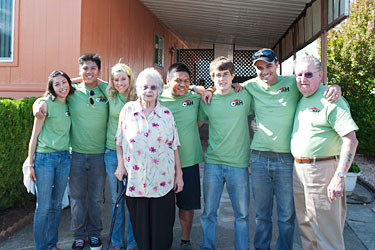 On Sunday, October 9, Pacific Union College students volunteered to assist Napa Valley senior citizens with home maintenance with a project called Rebuild Calistoga. The project is a partnership between PUC’s Office of Missions, Service and Justice and the Calistoga Affordable Housing program (CAH). It’s part of new missions and service coordinator Fabio Maia’s campaign to get PUC students involved in community service, both locally and abroad.

“We’re young—we have all the energy,” says freshman Arve Lloren, who volunteered on a crew repainting an elderly woman’s home. “I think it’s better to use that energy to help people rather than wasting it, sitting around in front of the laptop.”

In addition to repairing and restoring homes, the student volunteers helped CAH distribute subsidized carbon monoxide detectors to senior citizens at ACE Hardware. The detectors are not only important lifesaving devices, but were recently made a requirement for all homes in California.

Maia, only two months on the job at PUC, anticipates that Napa Valley residents will come to know PUC by the selfless volunteer service of its students. “It is a way for them to have hands on [experience], going out and serving the community,” he says. Maia has already laid the groundwork for long-term partnerships with the local community, with more Rebuild Calistoga projects scheduled for the school year.

But his campaign for more PUC-community interaction is about more than just putting PUC’s best face forward—it’s an act of ministry. “I don’t see any difference,” he says. “That’s what Jesus did … and that’s our goal. Wherever there is a need, we want to be there and fill that need. And if there is an opportunity to share, that’s what we’re going to do, but our goal is to serve.”

This past Saturday, October 15, Maia staged a second local service project, leading a group of students about an hour away to Berkeley, Calif., to feed and clothe homeless people in a public park there. Student turnout to that project was overwhelming; Maia had been expecting 50 students, but over 80 ended up attending. With such a positive response from students so far this year, he hopes to eventually have local volunteer projects scheduled every week.

On a larger scale, PUC students will head to the Navajo Nation in the Southwestern U.S. later this year to partner with La Sierra University and the University of California, Berkeley, to provide building and health services. Maia also has plans to take students to Costa Rica, Nicaragua and Brazil to perform similar ministries.

“It’s not about feel-good trips for our students,” he says. “We’re looking for projects where we can build relationships and make a real, long-term impact in those communities.”