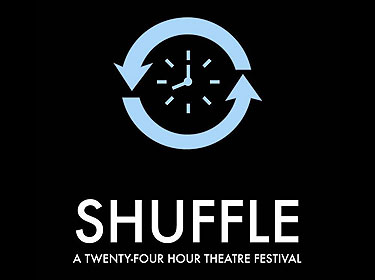 The second annual 24-hour theater festival was a big hit on Sunday evening, with people lining the walls of Alice Holst Theater and even watching from the lobby. Produced by the Pacific Union College Dramatic Arts Society, the festival was titled "Shuffle" and showcased four short plays created entirely in 24 hours.

Four playwrights were given titles (from songs) at 9 p.m. on Saturday evening, November 14. They wrote through the night and handed off their plays to directors the next morning. The directors and their teams of actors spent the day rehearsing. At 8 p.m. Sunday evening, the theater was packed with an expectant audience.

"Shuffle" producer, PUC student, and drama program intern Timothy Widmer explained that "last year DAS produced the first 24-hour festival and it was so much fun we decided to do it again." Following the show, he also ran through the impressive list of classes and productions still to come this year, including a new work festival and new classes such as script analysis and techniques of stage production.