Pioneers: A Season of Sportsmanship and Wins 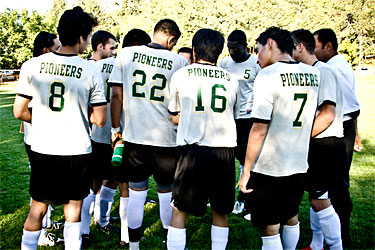 As Pacific Union College's Pioneers varsity teams in womens volleyball, mens soccer, and mens and womens cross country close their seasons, and as mens and womens basketball opens, the teams exhibit positive sportsmanship along with some serious wins.

On November 11, womens volleyball team members Heather and Tiffany Jacobson were named members of this year's California Pacific Conference Volleyball All Conference Teams. Tiffany also received Freshman of the Year honors. The volleyball Pioneers made a positive comeback this year and made it to the quarterfinals for the Cal Pac Tournament, concluding their season on November 11.

The mens soccer Pioneers finished their record season with a 3-1 victory at CSU Maritime on November 12. They made it to conference championships and narrowly missed the chance to play in the NAIA national championship, falling into second in standing (behind Holy Names University). They finished their season with nine wins, two losses, and one tie.

The mens and womens basketball teams opened their official season on November 8 and 9, with the mens team winning their first game. The men will head to Oregon for two games, followed by a long line of California games. The women have games in California, Oregon, and Washington.