Graduating the Class of 2008 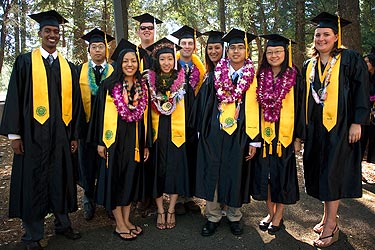 On Father's Day, June 15, 2008, the 317 graduates of the Pacific Union College Class of 2008 marched through the PUC Grove to receive 338 associate, bachelor's, and master's degrees.

A beautiful morning greeted visiting family and friends for the ceremonies and for PUC traditions such as the students throwing corn tortillas in celebration and grads mingling with well-wishers under the towering pines.

During the program, class president Tadele Worku presented the valedictory, sharing things the class won't forget about PUC, things they gained, and the challenge to make this moment the start of a good story. "Today is not the fairytale ending of our college careers," he said. "It is a fairytale beginning." Worku expressed gratitude for what PUC has meant to the class: "Thank you for giving us the opportunity and environment to continue to dream."

College president Richard Osborn also expressed appreciation for several groups, including the students who brought a humanitarian movement called REVO to the PUC campus and raised nearly $10,000 to end human slavery, nursing students who were deployed in the military, student missionaries and task force workers, and student leaders.

And what it really is, he said, doesn't change with time and technology. At heart, real education is still about the big questions: "What is Justice? Are all men created equal? Is anything worth dying for? What is beautiful?" Real education is also something that continues after graduation. "It is a process that never ends," Anderson told the graduates.

Anderson took it a step further, addressing the elements and goals of education at a Christian college. Though we can't test students on their Christianity or their walk with God, Anderson said, "Jesus Christ should be the organizing principle of our education." He concluded with the title of his address, "In Luce Tua Videmus Lucem," which comes from Psalm 36: "In Thy light we see light."