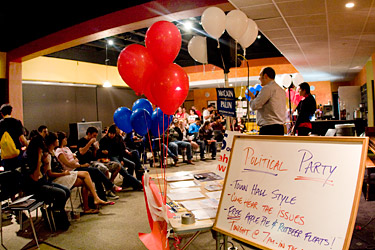 With election day fast approaching — and with this year’s much-talked-about ballot — politics, parties, and polls have naturally worked their way into campus life. Class discussion in the Honors seminar “Alterity” have delved into the social background for the to-do on various candidates. Students can always catch some CNN in the Campus Center and have gathered there to watch the candidate debates. The Social Work Forum provided voter registration forms and will host a shuttle to the polling location. And a full Campus Center welcomed a “Political Party” on October 29.

Hosted by the Student Association, the “Political Party” featured a Democrat table and a Republican table; commentary and an open forum for issues on the ballot, with a panel of senators and faculty members responding to questions raised by the audience or the facilitator; and apple pie.

Student and village district senator Matthew Reeves opened the forum with a basic explanation on bonds and some commentary on how they play into measures on California’s ballot this November. Another senator, Zach Benton, presented background and commentary on Prop 4 (Waiting Period and Parental Notification Before Termination of Minor’s Pregnancy). Reeves and senator Cristina Alba then represented opposing sides on Prop 8 (Eliminates Right of Same-sex Couples to Marry). From then on, Prop 8 generated question after question and comment after comment, garnering far more attention than any other topic, including presidential candidates.

In the discussion on Prop 8, both in the presentation from Reeves and Alba and in the open forum, people brought up a wide spectrum of issues. They discussed how marriage is defined, California’s Prop 22 from 2000, and the impact legalized homosexual marriage could have on churches and ministers. It was apparent that the extensive debate about this controversial proposition, including in the Adventist church, has drawn in PUC students as well.

Far from being a time when any official statements were made or voting direction advised, the forum was an open-ended discussion where a myriad of perspectives, ideas, and concerns could be expressed and discussed. With every topic, the presenter, panel, and audience maintained a refreshingly respectful and positive attitude. Though each topic drew comments from people who obviously disagreed with each other and stood on opposite ends of the spectrum, all questions and comments were presented with openness and respect, even with laughter erupting frequently.

Questions from the audience ranged from “If we allow gay marriage now, will it be polygamy next?” to “What does the panel see as the biggest policy difference between the presidential candidates?” In the two hours of the “Political Party,” discussed elements ranged from the law of unattended consequences to the powers of the branches of government to the economy and gas prices.

The Campus Center will continue to facilitate student participation in this election. Student activities director Doug Wilson said they plan to leave up the party tables with all their info on the parties and propositions, and will continue their practice of having CNN on perpetually. “We do encourage keeping kids posted,” he said.