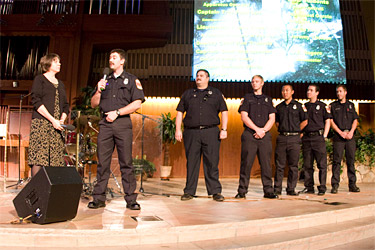 In the late afternoon of Friday, October 10, a seemingly harmless incident with a car on the side of Deer Park Road generated a spark that took off through dry grass and became a blaze within minutes. Angwin and Deer Park residents were quickly on the alert — and the firefighting forces multiplied as wind spread the fire.

At Pacific Union College, key people stayed in touch with CalFire and were on the ready for whatever might happen. The campus was very briefly without electricity. Special announcements were made to the students at vespers and in dorm meetings regarding fire status and procedures in case the campus should be threatened. About 100 people were evacuated in Deer Park, but Angwin was never threatened. Residents heard the trucks, planes, and helicopters through the night, however; and the glow and smoke could be seen from surrounding areas. The main road off the hill was closed, though most people were able to come and go using Old Howell Mountain Road.

The Angwin Fire Department was not a part of the initial dispatch, except for their water tender (for transporting water to the fire location). But later in the evening a team of ten Angwin firefighters and three engines was called to help. The ten were Lieutenant James Robertson, director of our emergency services program and a physics professor; Captain Sean Westenrider, our chief of Public Safety; Captain Troy Petersen, an emergency services program instructor and nursing student; Captain Quentin White, a PUC parent; and students Jeremy Thomas, Justin Pope, Michael Ha, Nathaniel Garcia, Tyler Cantrell, and Forrest Hasso.

“They did a fantastic job,” says Robertson of his teammates. “The terrain was steep and rocky, it was dark and we worked for 15 hours before being released. That is when we come back to the station to do two hours more work to get the equipment back together.”

Hasso was one of the firefighters “laying hose” all night: “We have backpacks that are like 60 pounds with hose in the pack. You trudge up the hill and hook one to the next one, and as you’re walking you’re spraying fire and hoping it doesn’t get out of control. It got a little tiring…”

Others, such as students Garcia and Ha, went down the line and connected smaller hoses at special junctions, using those to put out small fires along the fireline that could possibly jump to not-yet-burned vegetation. Ha explained how it felt to trek through the area with headlamps for so many hours. “Hiking around, being tired… any time we had breaks, taking a five-second nap. I just closed my eyes for five seconds.” But it was no boring adventure for him. “I was excited,” he recounts. “This is what I want to do for the rest of my life. So my passion grew even more after this experience.”

By the time the fire was completely over and done on Monday, the 13th, around 300 acres had burned, along with one home and garage. The firefighters were able to protect all other structures. At the peak, there were 1,569 personnel assigned to the fire, along with 146 engines, 16 dozers, four helicopters and 10 water tenders. “We got really lucky with this fire in that this was the only fire that was going in the state of California at the time,” explains Westenrider. “So we were able to get just unprecedented resources.”

Westenrider also explains a defensive measure that helped fight the fire. “About 10 years ago Chief Barclay (retired now)… had done what’s called a mosaic burn. Without any fire going on at the time, were able to burn spots into the hill to get away any of the vegetation so at some later point if a fire were to start and start going up the hill toward Crestmont, it would actually slow down… that helped significantly on this fire.”

But what stands out most to the everyday citizens of the area is the courage, support, and work of firefighters and community members alike. Resources and evacuation centers were offered. Community members gathered to pray. After the fire, signs went up on roadsides thanking the firefighters.

Student Nicole Hubbard wrote about gathering in a home: “The first Friday night of the fire, a group of students and Angwin residents gathered at a resident’s home for pre-vespers, where we were treated to a warm, fulfilling home-cooked meal of hot soup.” After the meal, the group spent time in prayer. “Everyone gathered together in the living room to pray, getting the opportunity to open each heart to each other and to the Creator. The fire was foremost in most minds but, beyond that, the Holy Spirit was present, filling each person present with a peace and sense of belonging that was almost beyond comprehension.”

On October 13, the Angwin Fire Department sent a crew to a more distant fire. Engine 18 and a crew consisting of Captain Bill Cochran, PUC director of budgets and fiscal services, and students Grant Benson, Tyler Cantrell, and Jeremy Thomas took an assignment on one of the large fires in Southern California. They returned on October 17.