2008 Elections and the Campus 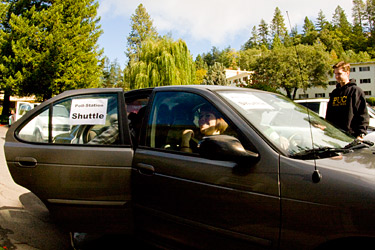 After the Social Work Forum’s push to register voters, classroom and informal debates over Prop 8 and candidates, formal debates about election issues in the Student Association “political party” and a PUC-Cast special episode, and students participating in a survey of Adventist campuses, election day itself was fairly quiet on campus.

True, shuttle cars coordinated by the Social Work Forum transported some students to and from the Angwin polling place, but as professor Monty Butler reported, many chose to vote by mail-in ballot.

Evening found a little more hubbub as a good-sized crowd kept the Campus Center full. Students came through as they could to catch the results and speeches on the big-screen there. Doug Wilson, director of student activities, said there were a few cheers and boos as results came in, but mostly students were just “interested in seeing the whole process.”

Before the election, some of our students participated in a survey conducted for Spectrum magazine by Roger Dudley, director of the Institute of Church Ministry at Andrews University. Students at Andrews University, Southern Adventist University, Union College, La Sierra University, and Walla Walla University also participated in the survey, and an initial report was published on the Spectrum website. A more complete look at the survey results will be included in a December issue of Spectrum. This survey looks at such statistics as who students were planning to vote for, what issues were important to them, and how much their religious beliefs influence their voting.
Prev ArticleNext Article