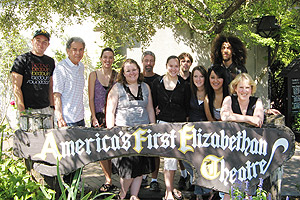 While cramming five Shakespeare plays into three days is enough to have students thinking in iambic pentameter for the rest of the summer, 14 PUC students and alumni found it to be an invigorating experience when they attended the annual Oregon Shakespeare Festival (OSF) this summer in Ashland, Oregon, for PUC’s Shakespeare in Performance class.

The class began with a tour backstage so students could get an intimate behind-the-scenes look at all the factors that go into running a repertoire theatre, including scheduling, costuming, set design and direction. The students experienced an afternoon and evening performance each day and in the course of three days students attended performances of “The Tempest,” “As You Like It,” “The Taming of the Shrew,” “Tartuffe,” and “Romeo and Juliet.”  Between plays, students participated in seminar discussions in which they both prepared for and reacted to each of the plays.

As if that wasn’t enough, students also saw a “Prologue” that was prepared by the OSF. Later, they met and conversed with the actress who played Ariel in “The Tempest,” who gave the students insight into her particular role and her experiences as an actor. During down time, students explored the town of Ashland, which is built around the festival and offers copious restaurants, bookstores and shopping to complement the Shakespeare experience.

While the class is required for students who are majoring in English education or minoring in drama, many of the students who did not need the college credit came for the sheer pleasure of watching Shakespeare onstage.

Cynthia Westerbeck, PUC English professor and tour coordinator, believes that seeing Shakespeare onstage helps students to appreciate the theatre experience. “The culture of the festival is simply an immersion in the world of live theater, giving students an opportunity to see both the hard work that goes into producing live theater and also experience the magic that happens when all that work turns into a polished performance,” she says.

The students agree that immersion is key to making Shakespeare come alive. PUC alum and class participant Cammie Wheeler says, “By the end of seeing that much Shakespeare, you’re more comfortable with it—the characters, the language—and you can appreciate it more.”
Prev ArticleNext Article