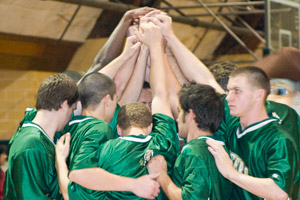 The award is given to the team that displays outstanding sportsmanship and exemplifies the purpose of the “Champions of Character” program that was set up by the National Association of Intercollegiate Athletes several years ago. The award is voted upon by coaches from the member institutions of the CalPac Conference and is based on character and personalities of the athletes as well as athlete conduct during winning or losing game situations.

The Sportsmanship Award tops off what was a truly amazing season for the PUC Pioneers, who made their first appearance in the conference playoffs and played a first-round game in the CalPac men’s tournament against Simpson College. Though the Pioneers lost the game, 85-77, they were graced with the support of their fans who overflowed the stands and were led by one extremely devoted group of PUC students called the “Pioneer Posse.”

Receiving the award for a second time is an honor for the PUC athletic department, which has been growing and gaining momentum in several different areas of athletics in the past few years. “I think it shows that we are representing PUC in a positive manner. I think it speaks very highly of the type of student-athletes and coaches that we have here. It’s definitely nice to be recognized for that,” Castillo told the Napa Valley Register newspaper.

It is his breadth of responsibility and accomplishments that got Castillo, who is the athletic director, sports information director, and now the men’s basketball coach at PUC, noticed by the Register. In a full feature entitled “Castillo Picks Up Slack at PUC,” Marty James, the executive sports editor, details Castillo’s accomplishments and calls him a “marathon man.”

Both Castillo and the student athletes who play on the Pioneer basketball team are planning on a busy but rewarding 2007-2008 season. “With men’s basketball, we’re just going to try and keep the momentum going and keep building of the success,” Castillo told the Register. “The group that’s coming back is very excited on building on that.”
Prev ArticleNext Article