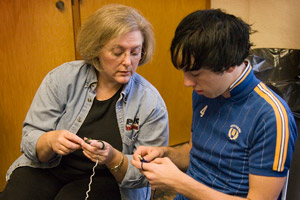 Today’s youth are constantly in the crossfire of public opinion. The “millennial generation” is criticized in the media, which depicts them as narcissistic and shallow. But at Pacific Union College, campus chaplain Roy Ice sees something in today’s youth that others have missed. “Millenials are much more willing to serve than previous generations. Ninety-two percent say they will volunteer if they believe in the cause,” he reports.

At PUC, students are already living up to the numbers, with grassroots volunteer groups becoming ubiquitous on campus. Sensing a cultural shift among students, PUC leadership is strengthening their focus on service, which has always been one of PUC’s core values.

In philanthropy, large donations and publicity-laden events garner the lion’s share of attention. Though PUC doesn't discourage this kind of service, the college aims to redefine how a person can make a difference. Pastor Ice points to Galatians 6:2 as a guide for the campus’s direction: “Share each other’s burdens, and in this way obey the law of Christ.”

Various service groups have sprung up around campus to meet this challenge. Dean Annette Riebe of Andre Hall leads “A Stitch in Time,” a group of students who use their talents with a needle and thread to help the less fortunate in our community, sewing everything from teddy bears for poor children to scarves for migrant workers.

Residents of Newton Hall are finding both large and small ways to make a difference. Recently several of the dorm’s students held a surprise car wash at the local gas station, washing windows, checking oil levels and refusing donations. Dean Kurtz of Newton Hall speaks with excitement about the mission that he sees his men fulfilling. “We want to see the guys building a character of generosity, without thinking about how money is involved,” he said. “That’s part of the philosophy of manhood that we’re trying to build.”

In an effort to guide and support this growing philanthropy, PUC is promoting service during weekly all-campus colloquies. Each quarter has a theme. Fall’s “A Sense of Vision” encourages service as part of the PUC identity. In Winter, “A Sense of Purpose” will introduce students and faculty to local organizations that have chosen to serve mankind. In Spring PUC will feel a “Sense of Pride” as colloquies celebrate those who have placed service to others above themselves throughout the year.

Through its focus on service, PUC hopes to make a difference and serve as an inspiration to the local community and the Adventist world. Pastor Ice has said that he wants the college to be “PUCuliar.”

“If you were to ask non-Adventists out in the community right now,” Ice goes on to say, “they might say that we are peculiar because we don’t serve meat, or because we go to church on Saturday. They may think it’s peculiar that we live around all these wineries but we don’t drink wine. Our goal is for people to find us peculiar because we are willing to sacrifice time, money and energy to help people, regardless of circumstances.”
Prev ArticleNext Article